This is a solid example of the kind of horror-comedy which it appears New Zealand likes to make. I think Peter Jackson is likely responsible – his influence is clear here, and made explicit with the Bad Taste T-shirt sported by one of the characters. This is largely a love-letter to heavy metal, and the more familiar you are with the genre, the more I suspect you’ll likely get out of this. However, all you really need is an awareness of the idea, that liking this kind of music equates to Satanism in certain circles. 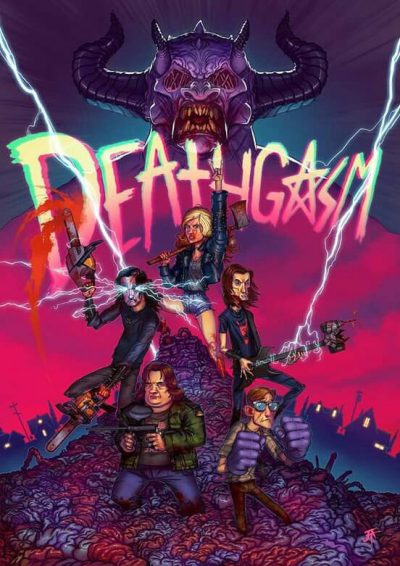 Brodie (Cawthorne) moves to a new town to stay with his aunt and uncle after his mother is institutionalized. But with his metalhead lifestyle, has immense trouble fitting in. Not the least of his problem is David, his cousin, who bullies Brodie and his pals. At the local record shop, he meets Zakk (Blake), a local bad-boy and fellow metal fan; together, they form a band, the titular Deathgasm. Zakk reveals musical legend Rikki Daggers is hiding out in town, and while exploring Daggers’s house they come into possession of some ancient sheet music, which becomes Deathgasm’s latest song. Big mistake. For it’s actually an ancient “Black Hymn”: it opens a gateway to hell, through which demons enter, possessing the locals. They have to close that portal before the big bad, Aeloth, joins them, and there are Satanists in town who, for one, welcome their new Satanic overlords.

Rather less successful is the attempt to shoehorn romance in – something Jackson did much better in Brain Dead. Here, Brodie is able to sweep in and steal David’s girlfriend, Medina (Crossman), converting her into a fellow metalhead after nothing more than ten seconds of music. If it were that easy to win over a babe, I’d have got laid a lot more in my teenage years, with my copious Spandau Ballet collection. Fortunately, this is more of a minor sub-plot. The makers are considerably more interested in the mayhem, both demonic and otherwise. The film’s overall approach is probably best summed up in this exchange:

Zakk: Y’know – it’s weird, but I think he would have wanted to go out like this.
Brodie: His eyes ripped out, face grinded off and then head mounted under a car engine?