One part Sister Act, one part Double Impact, and unfortunately, not quite as entertaining as that combination may sound. We have twins Vanessa and Marie (both played by Stinshoff) who, despite their shared DNA, have grown up to lead very different lives. The former is a habitual criminal, currently working as an exotic dancer – albeit in the kind of chaste establishment where no-one actually gets nekkid, this being a TV movie. The latter is a nun, whose convent is teetering on the brink of being shut down by the local monsignor. Vanessa steals a briefcase of diamonds from her highly shady employer, Gromek (McTavish), and goes on the run, eventually hiding out in her sister’s establishment. 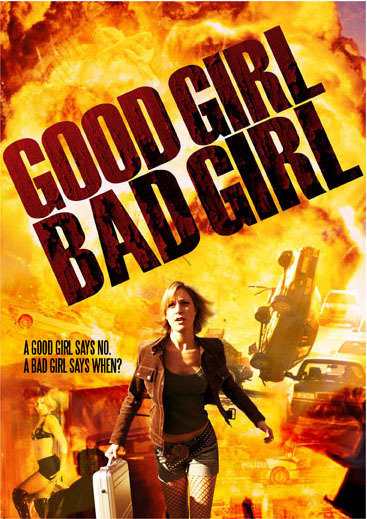 Through the usual kind of contrivance, they end up swapping places, and the briefcase goes missing, somewhere in the convent. So Vanessa-as-Maria has to pretend to be a nun, while trying to recover it, and also handle the visiting monsignor. Meanwhile, Maria-as-Vanessa is back at the club, being helped by moderately attractive good guy, Tex (Duryn), Together, they try to stave off Gromek’s not-so-polite inquiries as to the whereabouts of his gems, which he urgently needs as payment for a French gang, with whom he is doing business. The cops, under Inspector Köster (Brimble) are also closing in, seeking to take down the gangster. Or Vanessa.

Will there be mistaken identity hi-jinx, in which neither nun nor stripper act as they are supposed to? Of course! Could we get an inordinate volume of cars flying through the air and flipping for no particular purpose? Naturally! Might this even include – dare I ask – a musical number in which Vanessa-as-Maria does a vampy cover of Ave Maria for the entertainment of the monsignor? Well, now you come to mention it… This is rarely less than obvious, and nor does it ever manage to get out of second-gear, despite the frequent car chases which seem to suggest Vigg had a brother working in the scrap-vehicle business. These are quite well-staged, I have to say, though less Giant Fireball-y than the cover would have you believe.

There’s something of a Teutonic version of Guy Ritchie feel to this: criminal capers, with larger-than-life characters like Sister Agatha, the elderly and deaf nun who is running a bootleg schnapps distillery out of the convent. It doesn’t mesh in anything like the same way, the plot is positively simplistic compared to the likes of Snatch, and some of the performances are too low-key to be effective, especially on Gromek’s side. The film is in sore need of a Bricktop or similar, to act as a “righteous infliction of retribution manifested by an appropriate agent.” Still, it managed to retain my interest, with Stinhoff’s dual performances adequately fun to watch as things proceed to an entirely unsurprising finale. This managed to be a weak cross between The Sound of Music with Home Alone. Now, that’s an elevator pitch I’d pay to see.