The mummy is, for me, probably the least interesting of the classic movie monster stories. Dracula, Frankenstein and the Wolfman all have much better scope: you can take the story in a range of different directions. But mummies are kinda dull: certainly, considerably less of a threat than a vampire who can hypnotize you, then vanish into mist. Unstoppable they may be, but providing you are capable of moving at quicker than a slow amble. you can simply jog away from a mummy. They’re like zombies, without the pack mentality which is the undead’s greatest strength [one zombie is not an issue, but when you have a horde of them…] To be fair, the same could be said about Frankenstein’s monster, but it’s really the backstory which matters there. As every pedant on the Internet will happily remind you, Frankenstein was the name of the scientist, not his creation. 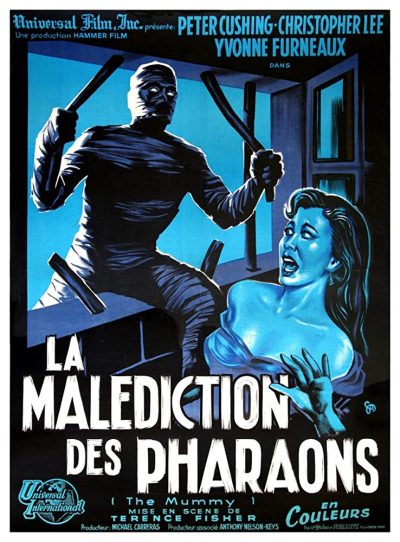 This may be why Hammer made only four films in this franchise, considerably less than for either Frankenstein or Dracula (and one of these didn’t have an actual mummy in it!). Unlike Drac and Frank, there is no original novel as inspiration, though claims have been made for Bram Stoker’s otherwise largely forgotten Jewel of the Seven Stars as the… er, mummy-lode. Regardless, there’s really only so much you can do with the story. Tomb gets robbed. Mummy runs amok. Mummy gets destroyed. Roll credits. In this case, literally while the monster is still sinking to the bottom of a bog. That template has been used, with little or no variation, from the 1932 Universal version, through the forgettable 2017 version with Tom Cruise. And it’s what we get here, despite efforts, of varying success, to pad things out.

It begins in 1895, with an English expedition in “Egypt”, which is just on the verge of cracking open the tomb of Ananka (Furneaux), the high priestess of the god Karnak. It’s led by veteran archaelogist (or “grave robber”, if you prefer) Stephen Banning, along with colleague Joseph Whemple and Banning’s son John (Cushing), though the last named is laid up with a broken leg. Much is made of this, presumably explaining why he can’t manage the jog of escape. When the tomb is opened, against the request of local Mehemet Bey (Pastell), Banning Sr. is delighted. I would be too, given its remarkably advanced recessed lighting….

But shortly after, he is found in a near-catatonic state. Having taken what they can, in a way only available to Victorian colonialists with a collecting bug, the expedition heads home, dynamiting the tomb behind them. Because who cares about preserving ancient sites? Three years later, back in England at the Engerfield Nursing Home for the Mentally Disordered (!), Banning Sr. has a brief period of coherence. He reveals to John the truth about what happened in Egypt: a mummy assigned to protect the tomb attacked him. He now fears the other expedition members may be at risk. Quite why is unclear, thought he’s not wrong. For Bey is now nearby, and after a brief detour into a bog, the mummy (Lee) is unleashed on the heathens who defiled the grave of his priestess. Banning Sr and Whemple are first and second to feel its icy fingers around their necks, and John quickly discovers bullets are useless. 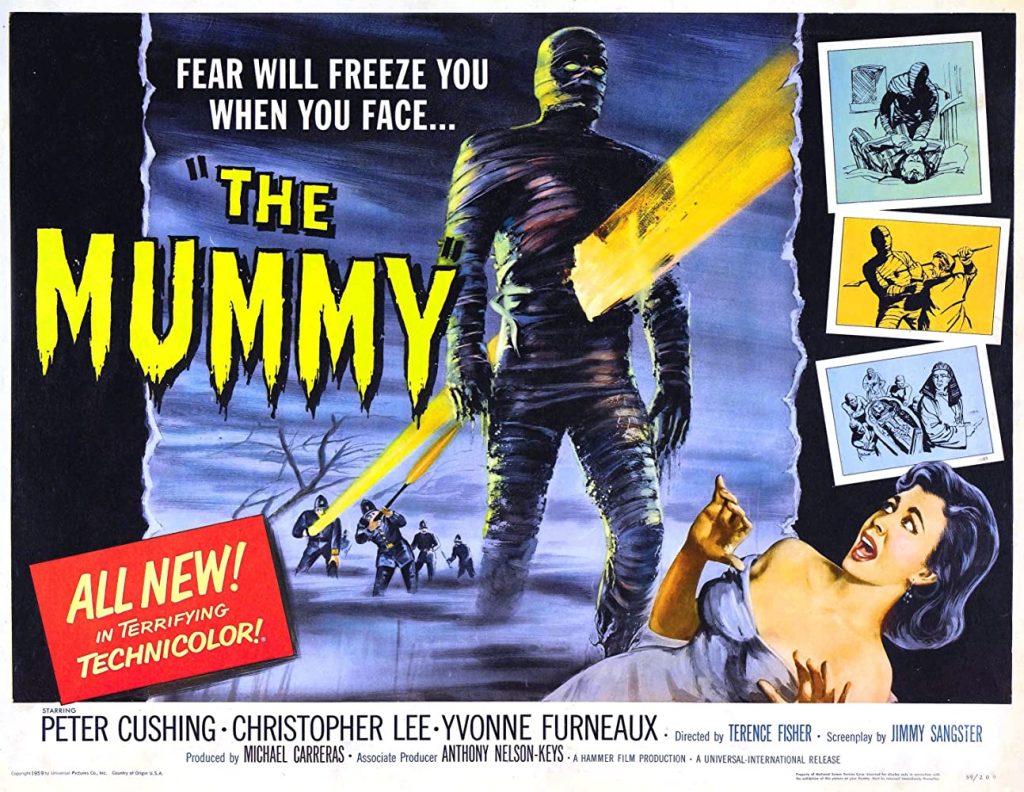 Needless to say, the authorities, in the shape of Inspector Mulrooney (Eddie Byrne), are skeptical. But with other eye-witnesses coming forward, and an attack on John that’s only foiled because of the resemblance of his wife (also Furneaux) to Ananka, even Mulrooney eventually has to take it seriously. A trap is laid, John visiting Mehmet and provoking him into unleashing another attempt, with a pithy string of derisive comments about his religion: “Karnak wasn’t a particularly important deity, a third-rate god… [His believers’] standard of intelligence must have been remarkably low.” This ends, as mentioned, with the mummy sinking into the marshes – a fate not unlike the ending of The Hound of the Baskervilles in that regard.

The time-line seems needlessly jumbled, particularly in Banning Sr’s flashback when he tells of the original encounter with the mummy in the tomb. This doesn’t add much to proceedings, since it’s hardly a surprise. There’s also the lengthy sequence where we go back several millennia to get the back-story of the mummy itself. Turns out, when alive he was Ananka’s forbidden lover. After her death he tried to resurrect her with magic, but was caught in the act and for this blasphemous act was condemned to experience a “living death” by going through the mummification process while still alive. Well, the wrapping in bandages, anyway. I’m not sure about the bit where they stick a hook up the nose and yank out your brains. This flashback is certainly over long: I could, for example, have survived without the detailed description of the marching order at an ancient Egyptian funeral.

Cushing is his reliable self, though his character never grasps that bullets don’t work. He’s particularly good when baiting Mehmet, applying a thin veneer of English politeness over a beautifully constructed series of elegant and deliberate barbs. But especial kudos to Lee, who manages to retain his dignity remarkably well, whether wrapped from head to toe and only able to act with his eyes, or lumbered with rather unfortunate costume and make-up choices (below). He apparently took a pounding too, hurting his shoulder, knees and back during filming, as well as being burned by the gun squibs. I was also quite impressed with Pastell, who cuts a relatively sympathetic figure as the aggrieved acolyte of Karnak. It’s also nice to see someone of at least semi-appropriate ethnicity being used – Pastell was a Cypriot – in sharp contrast to, say, the yellow-face used by Hammer just a couple of years previously, in The Abominable Snowman. Let’s skip past casting a French actress as an ancient Egyptian, shall we?

All told, it’s merely okay, though nicely photographed. I think my lack of whelm is likely down to the weakness of the underlying concept. As discussed above, mummies rank really low on the list of cinematic horror threats for me – coming in above shark-infested thunderstorms, but only marginally. Make no mistake, this still has a good case for being the best mummy film of all time. It’s just that the field is not a strong one (I’ll confess a sneaking regard for the Brendan Fraser version, simply for sheer fun). The thrills here are very much of the second-tier level, even allowing for the kinder, gentler era.

[November 2010] After Hammer teamed up with Universal, they got the rights to do “official” remakes of the Universal back-catalogue, instead of tiptoeing around the public-domain version. This was the first such, combining elements from The Mummy’s Hand and The Mummy’s Tomb. A trio of Egyptologists, John Banning (Cushing), plus his father and uncle, open the tomb of Princess Ananka, despite dire warnings from local Mehmet Bey (Pastell), of what will befall them. The father is left alone in the vault, and is driven made by something he sees. Back in Britain three years later, something breaks into the asylum where he’s kept and strangles him. Turns out Bey is intent on making his curse come true, using the living-dead mummy of Ananka’s high priest, Kharis (Lee), who was walled up after trying to bring the princess back to life [the whole forbidden love thing, etc.]. Needless to say, the police are not exactly convinced by Banning’s explanation. Fortunately, it turns out that his wife, Isobel (Furneaux) is the spitting image on Ananka. Really, what are the odds?

I think it’s time for a franchise reboot, with “fast” mummies, much like they did with zombies. Maybe they could have an Al Qaeda cell, using them for terrorist purposes or something. You’ll have plenty of time to consider such ideas because, much like the mummy itself, this takes it own sweet time to get going. On the plus side, I now know a lot more than I used to about the order of mourners at Egyptian funerals, courtesy of a lengthy, tedious flashback, where Christopher Lee looks a bit like that bloke from Stargate, which is pretty disturbing in itself. After this Discovery Channel special on burial rites concludes, and the bandaged version of Kharis starts rumbling about, things perk up, though Banning shows a disturbing lack of thought as he tries to fend off the mummy. Hint: it can’t catch you, if you blow its fricking legs off with your shotgun. Also, conveniently, the mummy understands English. I guess you have to do something when you’ve been entombed for 4,000 years. Palpable nonsense, that’s just about watchable. Rating: C