When it comes to horror films, the jump scare is a cheap shot, there’s no doubt about it. But if done right, there’s equally no denying that it can be effective. Normally, it’s also something whose impact diminishes with repetition. Yet here, there’s a certain point – probably about the fifth or sixth time you’ve been jerked out of your seat – where the curve starts to go upwards again. Not so much for the jump scare itself: it’s more the anticipation, and the sure and certain knowledge that the director is going to do it again. In certain shots, framed appropriately, you find yourself staring into the background behind the characters, bracing for something to loom out of the darkness. Well played, Mr. Erickson. Well played. 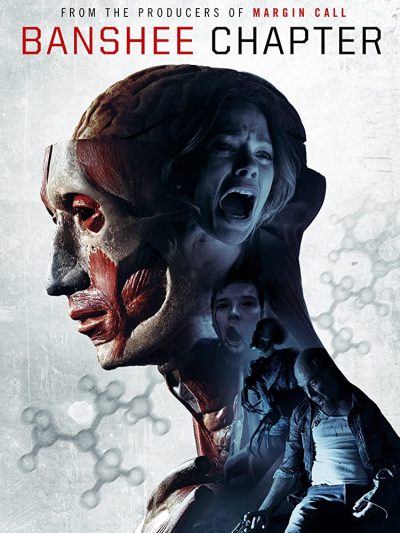 The story isn’t bad either. I didn’t realize going in, on what it was based: I gradually began to notice elements that were familiar due to From Beyond [Stuart Gordon RIP], e.g. pineal glands. Eventually the characters ‘fess up, discussing the H.P. Lovecraft story, though a really nice job is done of updating this. It begins with a brief history of MK-ULTRA, the US government’s mind-control project, then moves to the present day where journalist Anne Roland (Winter) is investigating the disappearance of a friend, James Hirsch (McMillian). Looking into MK-ULTRA, he had obtained and taken a drug used in those experiments. Weirdness ensued, including shortwave radio broadcasts, shadowy figures and the first of those jump scares, before James vanishes.

Anne tracks the source of the drug down to gonzo writer and connoisseur of pharmaceuticals, Thomas Blackburn (Levine), who is living reclusively on a farm in Colorado. She goes to visit him, pretending to be a fellow scribe, which leads to a night where Thomas and his pet chemist, Callie (Gabrielle), take the drug. The next morning Callie is gone. As Anne’s research continues, she eventually discovers that the drug acts as a receiver, somehow opening a portal through which… things can enter our world. And they don’t exactly appear to be sympathetic to our wants and needs, shall we say, taking possession of those in the vicinity. Can the portal be shut before more damage is done? Or is it already too late for that?

This is all relentless creepy, and shows you just enough of the creatures to make you go “Holy fuck, what was that?” before whisking them away into the darkness. Initially, it looks like a mockumentary, but the movie drops that conceit fairly quickly, likely for the better. I enjoyed Levine’s performance of a character clearly based on Hunter S. Thompson, though Winter was a bit forgettable. She didn’t seem to be acting, so much as reacting. Though considering the steadily escalating and berserk shit that’s going down around her, hard to blame her for that. Still, as an anti-drugs message – and going by the posters in the police station, it’s entirely deliberate – this is considerably more effective than Reefer Madness.