There’s no denying the generally liberal bent of Hollywood, which often becomes cringeworthy. But on the other hand, this proves that movies with conservative political messages can be equally as bad. I agree completely with the fundamental point here: that every nation has the right – and indeed the duty – to control immigration, which is a privilege of the highest order. But where this takes it, strays uncomfortably close to white supremacy. In the dystopian future depicted here, the “pales” are being suppressed by the “scrags”, following the opening of the US borders by its socialist leaders, and the wholesale takeover of the nation by the resulting influx of foreigners. 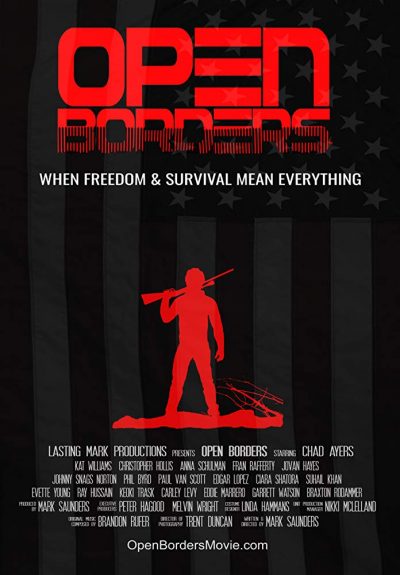 “Scrags,” incidentally, stands for Single Community Representing All Globalists. Which gives you an idea of exactly how clunky we are talking here. But if you want the peak of unsubtlety, here you go. Bronson (Ayers) and Jam (Hollis) are rebel pales, who rescue Misile (Williams) from being snatched off the street (shown, top) and taken for use in the scrag breeding program. Because the scrags, under their President (Hayes) are using white women to become more light-skinned. Yeah. It does sound like a delusion copied wholesale off a Stormfront side-chat, and illustrates the problem with pretty much all “message movies”. You’re preaching to the choir, and they are only going to appeal to those who already agree with the concepts being espoused. Everyone else – and in this case, that includes me, not exactly an SJW – is going to snort derisively and roll their eyes at this shit.

I do enjoy me a good dystopia, and the current fractured nature of the American political landscape undeniably offers scope for one. I could see, for example, some kind of Balkanization in the USA’s future, where the coasts peel off on their own, becoming technologically adept, yet still dependent on the heartland for everyday resources like food and water. That’s considerably more nuanced than this, which is a blunt club, having more in common with the lunatic fringes of AM radio. Saunders’ lack of experience in the script also shows up in other areas. For example, the death of a character might have had more impact if we’d actually met them before. And the pacing is off, too. The raid on the breeding centre where Bronson’s wife is being held, should have been the climax, but it rambles on for a good chunk thereafter, to no particular point.

The small budget is occasionally problematic. The scrag forces are hardly impressive, not least because of their thorough ineptness. Bronson and Jam, guys with no apparent military training, are able to best them repeatedly with nothing more than a couple of hand-guns. But despite all the above issues, I couldn’t bring myself to hate this. Ayers is pretty decent as the lead, even when dealing with dialogue which is painfully expository, and overall, the performances of the three leads were enough to hold the film together (contrast them to some of the supporting cast and you’ll appreciate them all the more!). And Saunders clearly cares, which is always worth at least some credit in my book. Just not in the same way I do.