This is proof that a film can do all the little things right, yet still manage to fail because it doesn’t have a good enough handle on the basics of plot and characters – the factors which matter above everything else. The central plot is about a group of marines, sent to a remote island on what is supposed to be a “training missing”, where they will face the next generation of soldiers. These are sentient machines, and have the capability to learn from their experiences, as well as share that data [CoughBorgCough]. Their name, S.A.R.. stands for Study-Analyze-Reprogram, so having them go up against real soldiers is a good test. Along with the Marines is Mills (Kirby), who has a few cybernetic enhancements of her own, and works for the Harbinger Corporation that made them. Which should probably be a clue as to what is going to happen, since the word “harbinger” is usually used only in conjunction with terms like “of doom.” 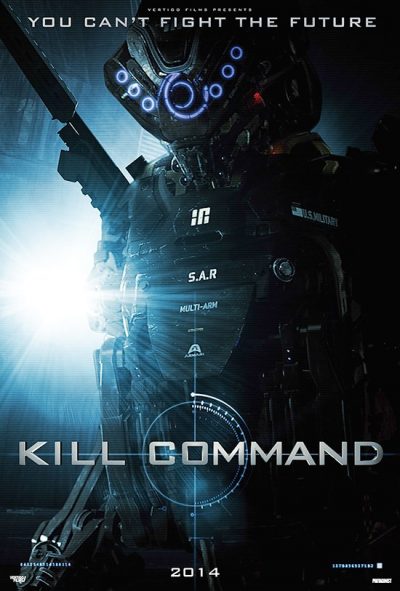 And, to no-one’s surprise – except for all the characters in the film – communications are cut off and the robots go a bit mental. What you have here is, basically, Aliens crossed with Short Circuit. The marines are the usual mix of stereotypes: the snarky one; the gruff Black guy; the gung-ho soldier; the cowardly one who melts under pressure. They’re accompanied on their mission by a female civilian, whom they don’t trust. But she turns out to be the only one who can figure out what’s going on, and gets to face off against the big bad at the end. Instead of acid-blooded extros, you’ve got caterpillar-tracked killing machines. Neither are exactly going to listen to reason. The problem with this kind of thing is, as always, if I wanted to watch a low-rent copy of Aliens… Well, I wouldn’t. I WOULD JUST WATCH ALIENS. And when you set yourself up beside the greatest action film of all-time, the resulting comparison is unlikely to end up being in your favour.

Which is a shame, since as noted, the stuff on the edges is by no means badly-done. Especially given the budget, the robotic elements the rest of the technology (from the surveillance drones to the craft on which the team are flown to the island), are impeccably well-executed. They look menacing just sitting there, and seem the sort of thing which the military-industrial conglomerate would come up with. Even Mills’ eyes have an intermittent blue glow, due to the display she has implanted in them. Whoever worked the production design on this, is surely designed for bigger and better things. Writer-director Gomez? He handles the latter part of his hyphenate reasonably, and keeps things moving forward at a decent pace. But the script here is not so hot. Maybe it should have exploited the tension hinted at after an early skirmish the soldiers and their robotic opposition, in which Mills is never targeted. “They’re trying to work out if I’m one of them or not,” she says. “Yeah,” responds one of the grunts. “So were we.”