Really, you could grade this anywhere from A+ to F, and I’d probably nod and agree with you. It aims relentlessly for the bottom of the barrel, and frequently manages to miss low. The resources are painfully limited. Some of the acting is sub-porno. Still, I have to admit, I was more amused and entertained by this than, say, Birds of Prey. It takes place at an annual sleepover held by a group of friends, new to which this year is Gretchen (Lupa) the super-weirdo. Turns out, she’s a mistress of the dark arts, and after suffering an unfortunate accidental death during a naked pillow-fight, becomes possessed by a pissed-off demon that’s out for revenge. It’s up to the others to figure out how she/it can be stopped before they are all destroyed. 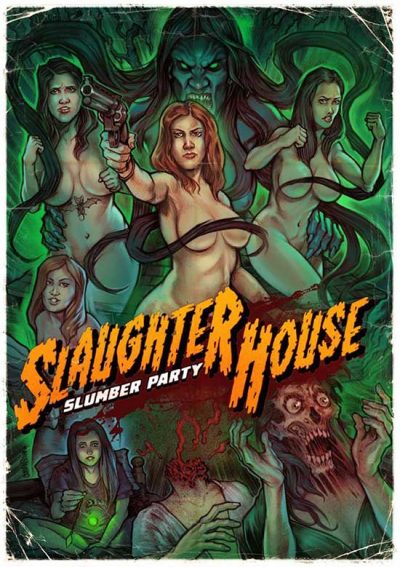 This is relentlessly meta, opening with a trailer for Skelepocalypse, the movie which the characters in the film watch later on, and then a drolly self-aware theme song by Society’s Ugly Son. Through the film, there are frequent cut-ins to character interviews, even of demonic Gretchen. It shouldn’t work, destroying any suspension of disbelief, yet these provide some genuine LOLs. Indeed, un-demonic Gretchen may be even more fun: if you imagine April Ludgate from Parks and Rec as a worshipper of Satin (sic), you’ll be in the right park. [“Is that the Necronomicon?” “No.”] She’s glorious to watch in anti-social action, and the rest of the characters are similarly broadly-drawn, and perfectly functional.

The biggest impressions there are made by Madison, who portrays Courtney with her irritable bowels, and Winkler as the Russian Stoya; her fondness for pickles turns into an important plot point, and she is subtitled despite speaking English. The effects are no less variable than the film as a whole: generally, the practical stuff such as the breastacles (exactly what you think they are) work better than CGI that often appears to have strayed in from a Playstation 2 game. But there are chunks where the low-fi imagination works surprisingly well, such as the ghostly realm where Gretchen’s soul has been hidden, that looks almost underwater.

Fred Olen Ray once called breasts “the cheapest special effect,” which brings me to the copious female nudity. Make no mistake: it’s there in abundance, including the biggest beaver colony south of the Canadian border. Without naming names, and in no way diminishing the zero fucks clearly given by all the actresses, this isn’t necessarily a good thing aesthetically. Vomit, fart and diarrhoea jokes abound, and to be honest, get wearing by the end. The script is better when being at least slightly smarter, such as discussing how “Necronomicon Ex Mortis” translates as “Book of the dead of the dead.”

References to bigger horror movies abound: Evil Dead most obviously, though I suspect there is a character called Carol-Anne, purely so she can say, “They’re here…” That this line is casually dropped in there, indicates the level of self-awareness present, and depending on your view, may or may not be welcome. Personally, I laughed with the film considerably more than expected.