Jarmusch isn’t exactly the first person you’d think of, to direct a zombie apocalypse film. But this is probably the kind of zombie apocalypse film, you would expect Jim Jarmusch to direct. It’s quirky and character-driven and has attracted a high-profile cast for even small roles (Iggy Pop plays a coffee-drinking zombie; Rosie Perez, TV reporter “Posie Juarez”). But it probably works more effectively for an audience that haven’t seen too many zombie films – which is odd, given the nods to previous entries in the genre. It also feels as if Jarmusch kinda got bored and lost interest in proceedings towards the end. 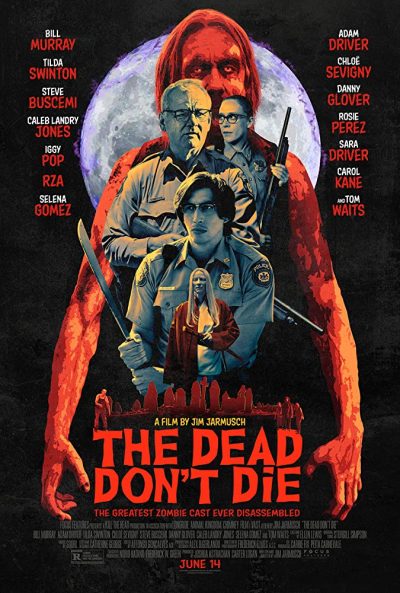 Events take place in the Pennsylvania town of Centerville (though actually filmed in Fleischmann, upstate New York), and… well, the title more or less gives you the entire plot. The dead start coming back to life, so have to be dealt with by local police chief, Cliff Robertson (Murray) and his two officers, Ronnie and Mindy (Driver and Sevigny). Needless to say, they’re seriously unprepared for this, though get help from an unexpected source. Recently-arrived Scottish mortician Zelda Winston (Swinton), swings a mean samurai sword, and looks like she’s fresh off the boat from Rivendell. Increasing numbers of locals and visitors succumb to the plague, while we grow highly familiar with Sturgill Simpson’s song The Dead Don’t Die. [Regular Jarmusch collaborator, Tom Waits, turns up playing a hermit living in the woods, looking even hairier than normal]

This is at its best when avoiding the conventions of the genre, because personally. I am already very well aware of them. No 2019 zombie film should be explaining about the need for decapitation. Instead, it’s little things I will remember. The way the hours of daylight change – the explanation is the usual BS about “polar fracking” knocking the world off its axis. The early deaths being repeatedly explained as an attack by an animal (“or several animals”). The puffs of smoke when zombies are dispatched. Then there’s Swinton, who as usual, is quite glorious: I’d have watched an entire movie about her off-kilter character, whose weirdness eventually gets an explanation which is both ludicrous, and makes complete sense, at the same time.  Jarmusch nails the small-town atmosphere beautifully, in a way reminiscent of Fargo.

However, the script spreads itself too thinly, trying to weave from an excess of threads, and some get lost in the mix. For example, three teenagers are held in the local detention centre. Even putting aside the question of why a town with a population of 750 would need a detention centre, I can’t remember what happened to them in the end, and I watched this less than 24 hours ago. There’s some breaking of the fourth wall which seems both pointless and lazy, such as Ronnie saying he was given the film’s script by the director, and telling Cliff he recognizes The Dead Don’t Die because it was the movie’s theme song. It’s just a bit too self-consciously indulgent: the film functions better as a comedy, and barely at all as horror.