This isn’t the first of its kind. Back in 2009, Night of the Living Dead was remade by a slew of animators as Night of the Living Dead: Reanimated, and the following year, Star Wars: A New Hope also got a massive, crowd-sourced fan remake. But this is the first example I’m aware of, where the technique has been applied to a film I love, and with which I’m hugely familiar. That definitely elevates the results: the more aware you are of Robocop, the more you’ll get out of this. Basically, 55 different film-makers each took on a small section, retelling the same story, but in whatever way they wanted. Live-action? Animation? Puppets? Musical numbers? Video manipulation of footage from the original movie? Bring it on. 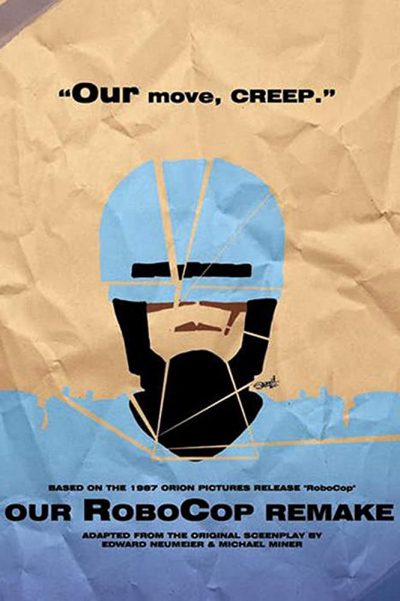 The results are, unsurprisingly, all over the place. In most cases, enthusiasm was more notable than resources, with real hair frequently peeking out from under wigs. But that’s not the point: it’s all about taking a cult movie and putting your own spin on it, in whatever way you want. It’s no coincidence this was released on the Internet about a week before the “officially sanctioned” remake. This is pointedly referenced in one sequence, where the scene is interrupted by a corporate lawyer serving cease-and-desist letters on the audience. He then reminds them to head to Fandango.com and buy tickets to see Robocop in theatres, February 12. And while they’re at it, why not also enjoy the Robocop Fiery Steak foot-long sandwich from Subway?

Highlights are almost too numerous to mention. The restaging of the shooting of Murphy, first with babies, then as an interpretive dance number. The flashback just before Robocop destroys ED-209, showing the latter’s happy family life (complete with ED-209 sex), flashing before its eyes. I already mentioned the songs: if Evil Dead and Carrie can become fully-fledged musicals, there’s no reason why the same can’t apply to Robocop. But I think the one which will stick in my mind longest is Scene 27, embedded at the bottom for your viewing pleasure. Gentlemen, you probably want to be sitting down. In an ice bucket. Let’s just say, it’s the scene where, in the original, Robocop shoots a would-be rapist in the crotch. Here… Well, cross your legs and watch. NFSW, obvs.

It certainly doesn’t all work. Some of the intended humour is painfully juvenile, and other attempts as social commentary miss the mark by a mile, e.g. the Nuke ‘Em game comes off as closer to a series of shrill Tweets than the biting satire delivered back in 1987, by Paul Verhoeven and Ed Neumeier. But there’s no denying the inventiveness and passion to be found here, even when the results are clearly over-ambitious, and frequently far beyond the credible boundaries of their creators’ talents. It will certainly inform and skew our reactions the next time we watch the genuine article. Classic lines like “Bitches – leave” and “Can you fly, Bobby?” take on a radically different perspective after you’ve seen this.