Army doctor Izzy Cormack (West) comes back from a tour of duty in the Middle East, rejoining her author husband, Ethan (Dane), their two kids Tommy (McMillan-Hunt) and Emma (Hanssen) and their newborn child, born just before Izzy had to depart. The soldier was traumatized by some of the events she went through there, and seems to have brought those troubles back home with her. She begins to see and hear things, and also has a series of disturbing experiences. Convinced there’s something going on, she installs CCTV, only for this apparently to prove these experiences have no basis in objective reality. When a spiritualist she hires is revealed as a fraud, that appears to confirm this is simply a case of PTSD. But her husband’s obsession with Hawaiian folklore seems to have a sinister motive, and a “relaxing” holiday on the island turns out to be anything but. 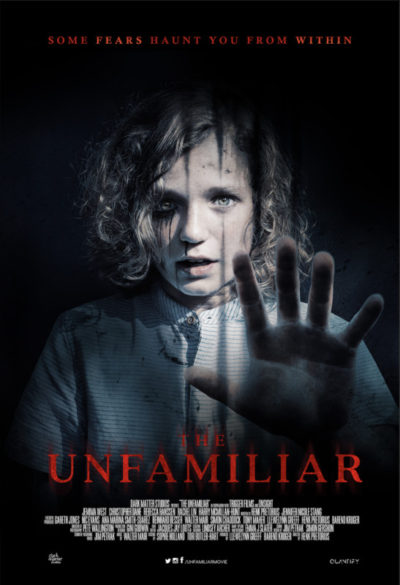 Ambivalence is sometimes a good thing in a movie. That’s the lesson we take away, from a film which does rather better when it’s keeping the viewer uncertain as to whether or not Izzy is mentally ill. For every moment which appears to indicate everything is a figment of her imagination, there’s another that makes you think, “Yes, there is something weird going on here.” It’s not an easy balance to strike, and Pretorius does it well, aided by solid performances from his cast. Dane, in particular, does sterling work as the husband who is initially delighted to have his wife return, only to see her fall apart in just a few days. Or is he? For there’s an ambivalence there as well, with his supposedly innocent work on Polynesian myths literally covering over an apparent darker motivation, discovered by Tommy and shown to Izzy, stoking her paranoia further.

When the film eventually gets off the fence and shows us it’s not all in Izzy’s head, it proves a bit of a disappointment. What’s going on does have its creepy elements, with an “other world” that can only be reached by magical ritual, through a portal which the dead and living can switch places. However, it’s all a little too convenient, with the presence, virtually next door, of a local expert who can handle the necessary occult shenanigans. It operates on a kind of logic which can provide plenty of atmosphere, yet I’m not sure it would stand up to close scrutiny.

However, Pretorius wisely keeps things galloping forward at a rapid pace, not giving the viewer time to pick at things, and the finale becomes a case of one damned thing after another – in more ways than one. Though I must confess we rolled our eyes like slot-machines at the final shot before the end credits, which we saw coming as soon as the scene opened. Again, I suspect a little more ambivalence and understatement, rather than the obvious, might have been the way to go.