There’s something of Natural Born Killers about this, in that it’s the story of a romance between two completely dysfunctional people, pursued by a cop who may not be much more sane. Also as in NBK, the female half is the product of an abusive father. However, in this case the abuse turned Daisy (Parkins) and her retarded brother, Bubba (Barrows) into cannibals, after killing Dad and escaping. Now, Daisy works as a cocktail waitress, while Bubba does the butchering on the farm, of any men unfortunate enough to cross their path. But into their world comes John Doe (Roberts), a serial killer with a thing for murdering tattooed hookers, and who falls for Daisy. Can they find happiness together? Especially with him being pursued by Detective Frye (Cleveland), whose daughter was one of Doe’s previous victims, and so is obsessed with taking him down. 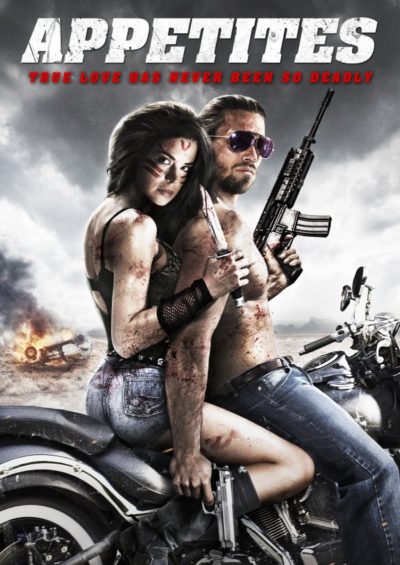 It’s probably all a bit too much for the film to handle. Rather than concentrating on one of these elements, and giving some insight into what makes its occupants tick, it tries to cover them all, and ends up doing none of them truly justice. This is a bit of a shame, since there’s enough potential in Daisy, John or Det. Frye, for any of them to occupy the film’s centre. Instead, we get missteps such as letting John burst into song, musical numbers which should have been strangled at birth. It doesn’t help that he comes over as a bit of a smug dick – and that’s putting aside the whole “stabbing prostitutes to death” thing [his first victim is played by Bonnie Rotten, who is basically the queen of alt-porn. Or so Wikipedia tells me… Anyway, it’s quite an enthusiastic sex scene].

Parkins’s portrayal is more sympathetic, and there’s a nice sense of loyalty to Bubba which is quite endearing. His hulking performance is also good, and at the other end of the size scale (for Barrows is 6’10” and a pro wrestler), is Charlie, the midget motel manager,  played to equally decent effect by Travis Eberhard. He ends up thrown into the trunk of John’s car, as a potential appetizer for offer to Daisy. But it’s just another element of the film which seems to need more room to breathe.

I tagged this in both the horror and romance genre, which I think is probably a first. Though to be honest, the former is mostly for the subject matter, of cannibals and a serial killer. The approach doesn’t generate anything in the way of dread, terror or fright. Indeed, the film’s main issue may be its inability to generate anything much in the viewer. All the right ingredients appear to be present; it just seems that something failed to happen during the cooking process, leaving the resulting dish short on taste. And at no point does anything remotely approaching the cover take place. John doesn’t even have a motorcycle, so I’ve no idea where that came from…