Well, this was a surprise. I was expecting not much more than a mindless spoof of those ludicrous shark movies we love. It’s considerably more, being among the most meta of meta-movies, and a heartfelt plea for not letting your artistic creativity wither and die. Hold on, while I try to explain the story.

Bernardo (Molinari) is a magical muse, whose job is to unblock film writers. He does this using a magic clapperboard, which drops them into their own scripts come to life, so they can work through their issues and complete them. His latest target are brothers Matthew and Jason (Matthew and Jason Ellsworth, unsurprisingly!). While growing up, they were obsessed with sharks, and wrote an unfinished script, “Sharks Outta Water”. But Matthew grew up, and abandoned the dream for a steady pay-check. Jason never did, and has now re-united with his unwilling brother;  when Bernardo calls action, the siblings find themselves dropped into their movie, and stalked by the titular creature. The only way out is to find the resolution to their own plot. 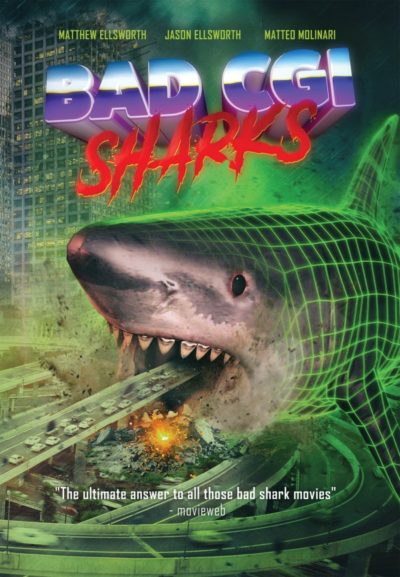 Which alone, would be enough. Yet, there’s more. For the shark eats a lap-top at Matthew’s job, and becomes self-aware. Coercing one of his colleagues (Liu) into upgrading her (let’s just say: horns), she gains a motive. From being a mindless killing machine, she is now going after the brothers for the negative and stereotypical portrayal in their script, of sharkkind, as mindless killing machines. It’s persistently breaking the fourth wall through Bernardo’s asides to the audience; there’s even an intermission in the middle, a chat-show in which he interviews one of the mini-sharks after it gets unleashed by its mother.

The film was clearly made with an affection for and awareness of the genre which it’s parodying. Take, for example, the spoof posters for other aquatic movies dotted about, such as “Unusually Large Seahorses”, and the “Shark Rapist” franchise, with its tagline “You’re gonna need a bigger throat.” Or Matthew’s response after he tries to notify the authorities: “Well, the police are going to be no help. But I suppose NWA could have already told us that.” It doesn’t all work: for every smart joke, there’s a painfully juvenile one. Yet it proved increasingly winning.

That does require you to buy into its approach, as much as the concept. You’ll need to get past stuff like Jason’s ludicrous hair, which is less a man-bun than a man-baguette, and Bernardo is sometimes more annoying than enlightening. However, it is surprisingly warm-hearted, and we eventually found ourselves cheering for the brothers on their quest through the surprisingly deserted LA landscape. It must also be said, the CGI really isn’t that terrible. Oh, it’s not stunning. However, I’ve seen far worse, in films which cost far more than this’s [checks notes] $6,257 budget – “estimated”, according to the IMDb. But who’d ever bother to watch a film entitled Moderately Reasonable CGI Sharks? I know we wouldn’t have. And that would be our loss.