While sometimes rough around the edges, you can only respect the way Pizzo pushes the pedal to the max from the very beginning. It opens with the scene above, where a man’s threesome with a pair of country hotties doesn’t unfold the way he hopes. In fact, one of them graphically bites his dick off, leading to Black Knight levels of arterial spurting from the severed stump. As you can see, not that this distracts said hotties. Remarkably, this is only the second most appalling sequence in the film. The top spot goes to one which managed to gross Chris out, in a way she hasn’t experienced since The Ebola Syndrome. I’ll not spoil it: let’s just say, this film is very much an equal opportunity offender. No genitalia shall be spared… 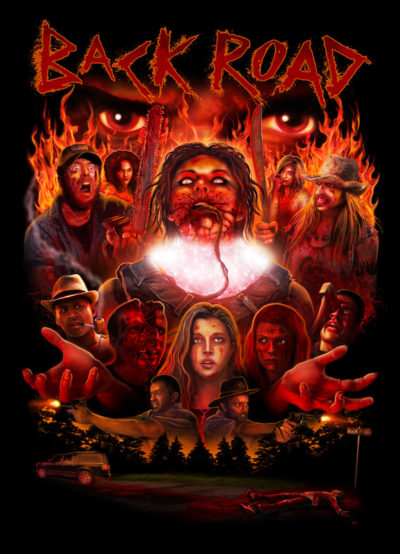 In terms of plot and characters, this is straightforward, throwback stuff, clearly influenced heavily by the likes of Texas Chainsaw Massacre and Wrong Turn. Madeline (Keefe) goes for a vacation in a remote cabin, along with four of her friends. On the way there, however, their car mows down a young boy; fearful of the consequences, they dispose of the body, and proceed to the cabin. However, the kid was part of the Ray clan, a local family of extremely disturbed individuals, led by Charlie (DeSanto). They are none too happy – to put it mildly – with the high-falutin’ city folk, coming out to their part of the world and killing their kin. Not even the local law (LeCompte) will be able to stop them from wreaking terrible revenge on Madeline and her pals.

That’s really all you’ve got, and at 96 minutes, it could probably use trimming. Some of the technical aspects are a bit rough too, especially audio that occasionally struggles to be audible. Yet, let’s face it, this isn’t the kind of film where the dialogue is important. And on the other hand, certain elements work surprisingly well. Charlie, in particular, is genuinely disturbing, and that’s a big help. There’s also a scene where Madeline escapes from a basement, and the camera tracks her as she runs, before pulling back to show the enormity of the landscape in which she’s still trapped. It’s beautifully done, and quite a contrast to what has gone before – a low-down dirtiness, with the film wallowing delightedly in the gutter.

Not that you are here for camerawork either, and nor does it matter that it’s easy to predict the order of death. You’re here for the mayhem, and the film delivers – though the most unpleasant of the city-dwellers, Fox, seems almost to get off lightly, “only” being cut up with a chainsaw. The low-budget effects are a bit of a mixed bag, but I loved the way they were entirely practical (no crappy CGI blood here), and the sick imagination on view was generally good enough to paper over the cracks. While far from perfect, it’s a film which we will remember. Indeed, “indelibly seared into our memory” may be closer. And if we don’t see a more repellent scene than THAT one for a few years… I think Chris might be okay with that.