Welcome to the Gender Studies component of your Hammer Films 1.0.1. course. For, despite occasional outliers like Brides of Dracula and She, they were not exactly a progressive studio when it came to female representation. Admittedly mid-sixties Britain was not exactly a progressive society when it came to female representation, so we can’t blame Hammer in particular, especially when this film is set considerably earlier. But this is perhaps their most striking example of cinematic chauvinism in action.

We can begin with the scene where Harry Spalding (Barrett) inherits the Cornwall cottage previously belonging to his late brother. Though his wife, Valerie (Daniel), is there too, the solicitor reading the will barely acknowledges her presence in the entire scene. All she gets from him is a perfunctory “…to you both,” tacked on to “My congratulations.” On arriving in town, George then makes his wife sit outside the local pub with a casual “Wait here, darling”, while he goes in to ask for directions. The most charitable assumption one can make, is that only women of a certain sort go into those kinds of places. It goes on, and on. Just one more example should suffice. After dining with Dr. Franklyn (Willman) and his daughter, Anna (Jacqueline Pearce), the women are shunted off so the men can smoke cigars and talk: “Anna, perhaps you’d like to show Mrs. Spalding your pets?” 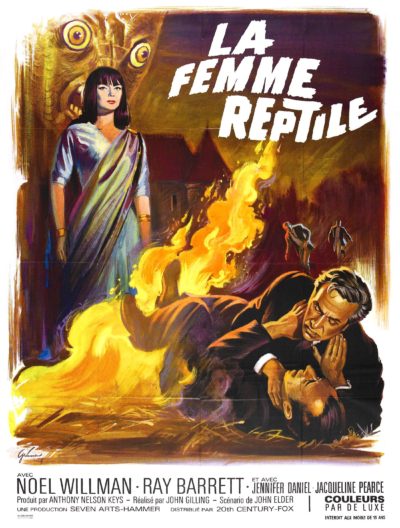 But perhaps the most interesting thing is the way the female monster of the piece is treated (I guess mentioning her sex is a spoiler, but the film doesn’t make much effort to hide that – and the French poster on the right even less, literally naming the movie, The Reptile Woman!). While the likes of Dracula and Baron Frankenstein have free will, and their evil is a result of those decisions, the Reptile, as with The Gorgon, has no agency of her own. She does not choose to kill, she does so because she is unable to help it – being a weak and feeble woman. The only comparable among Hammer’s male protagonists is in Curse of the Werewolf, and even there Oliver Reed was able somewhat to suppress his lupine tendencies. Thank you for coming to my TED talk.

Otherwise, I think I enjoyed this more than Plague of the Zombies, with which it shares sets and a number of cast (Pearce and Daniel in particular) and crew. Positives include Ripper getting considerably more to do than usual. It felt a shame he was never given the chance to be a lead, considering some of the mannequins Hammer chose to employ for those roles. The monster is actually fairly decent, compared to, say, the Gorgon. The prosthetic mask, apparently hated with a passion by Pearce, still looks good even now – exactly what you would expect the “half-woman, half snake” promised on the British poster (below) to look like. Though the best moment for me was probably when I suddenly realized the purpose of Anna’s “pets”. Let’s just say, she isn’t running the Cornish branch of the RSPCA.

It doesn’t all work. There’s an odd scene where Anna given an impromptu concert on the sitar, which ends with her father going all Bluto from Animal House on her. And while the ending does see Valerie break out from her husband’s dubious ‘protection’ (which consists entirely of him telling her to stay at home while he goes out), her actions aren’t exactly an advertisement for feminism. She’s not even able to outrun Dr. Franklyn, -and he needs a walking-stick to get about. However, considering this was released on the bottom half of a double-bill (with Rasputin, the Mad Monk), it’s a strong B-movie. Pearce’s performance makes her among the most sympathetic of Hammer monsters, and the supporting cast also help make this one worth watching, despite the lack of “big” stars. 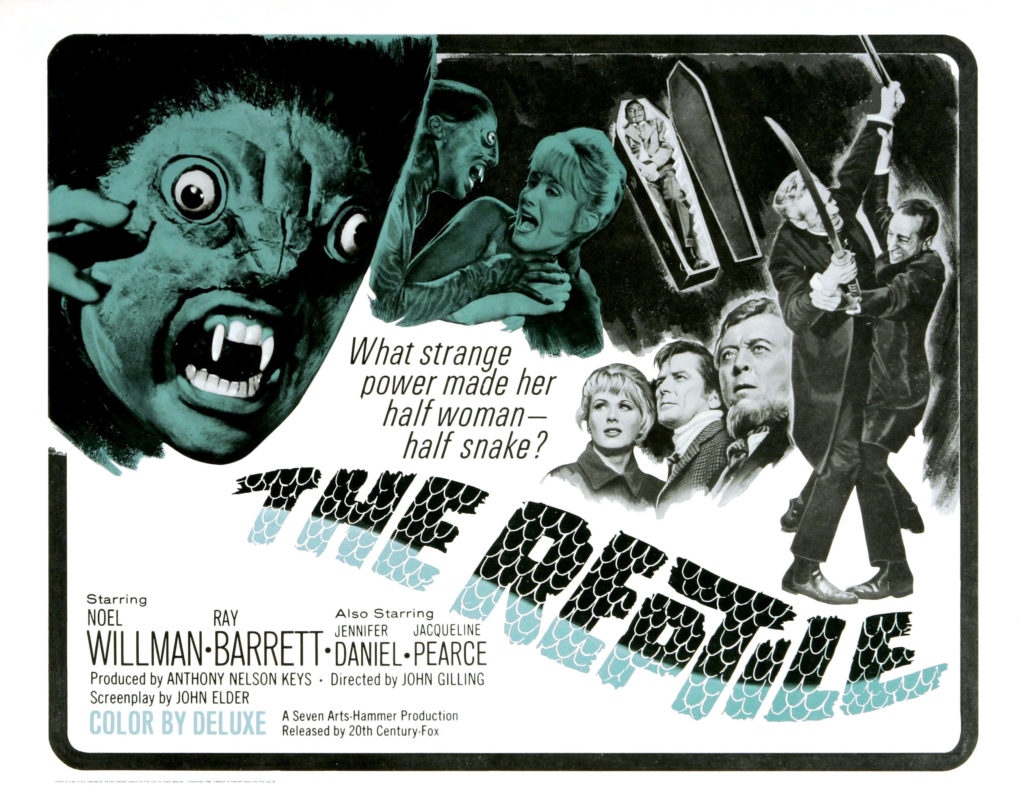 [November 2010] Filmed back-to-back with Plague of the Zombies, and sharing a number of the same cast, notably Ripper and Jacqueline Pearce – you might also find some of the sets a bit familiar if you watched the two (as we did) almost consecutively! Harry Spalding (Barrett) and his wife Valerie (Daniel) head for Cornwall to move into their inheritance, a country cottage bequeathed to them on the sudden and unexpected death of Harry’s brother. However, they are not exactly made welcome by the locals, except for the local inn-keeper, Tom (Ripper). They encounter some of the “colourful”, shall we say, local characters, such as Mad Peter (John Laurie from Dad’s Army) and Dr. Franklyn, a scholar who has returned from the exotic Orient where he was studying their native religions, and now lives in the local manor-house with his daughter, Anna (Pearce). Their strange behaviour – and the death of Mad Peter at the Spaldings’ dining-room table – helps set things up for an eventual encounter with the titular creature.

The set-up is probably better than the pay-off, which seems to involve not much more than interminable sequences of various people creeping around darkened corridors, and some strange decisions made by the lead characters, in particular Dr. Franklyn. Until then, the supporting cast really does a good job of setting up the creepy atmosphere, with especial credit to Ripper and Laurie, so much so that you really wonder why the Spaldings don’t do what would appear to be the sensible thing, and leave by the first train. There’s a very obvious plot-hole, in that the same venom which appears to knock anyone dead on the spot, has much less effect on Harry when he is injected, and there are also some continuity bloopers which even we struggled to ignore. I did like the creature design, which is fairly simple, yet effective, and doesn’t look nearly as bad as I thought it might. Despite running out of steam, this is at least an original entry in the Hammer canon, showing they could come up with their own ideas too. C+