Turns out, I’d already reviewed this one a decade ago. Fortunately, it looks like it ended up receiveing the same grade as I was going to give it here, so I’m clearly being consistent! Let’s start off with that review, and we’ll then expand things a bit, with some contemporary thoughts.

[July 2010 review] Christopher Lee was not involved in making the sequel to Dracula, but Hammer wasn’t willing to let such a profitable property go to its rest, so brought the cheaper Peel in to play a blood-sucker instead. His Baron Meinster is kept chained up by his mother, until inadvertently released by Marianne Danielle (Monlaur). She’s a teacher on her way to a new position, who doesn’t realize the evil that lurks within his elegant frame. He follows Marianne to the ladies’ school where she works, which has the potential to provide an all-you-can-eat buffet for the Baron. Fortunately, Doctor Van Helsing (Cushing) is in the area, ready to martial the forces of light, as the dead bodies start to pile up around the village, and the local girls start developing unpleasant habits – such as hissing loudly and an aversion to crosses. 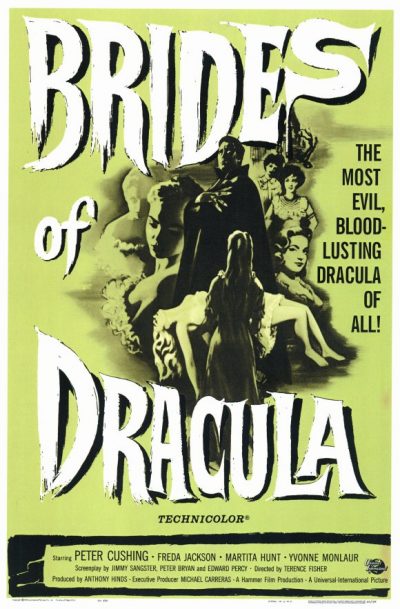 Peel is the George Lazenby of Dracula movies – this was his only appearance, and it’s easy to see why he was dumped, possessing none of the screen presence Lee brought to the role, instead coming more from the Robert Pattinson school of performances. There are also some totally cringeworthy bat effects, which completely derail the movie’s atmosphere whenever they are used: the IMDB says, “The prop department put a lot of effort into making a realistic model bat. It got lost and had to be replaced on short notice.” No kidding. The script plays terribly fast and loose with vampire lore and has some gaping holes, apparently due to multiple writers – for instance, the fate of the titular brides is conspicuous by its complete absence.

Fortunately, the other aspects of the movie are good to excellent, led by a surprisingly-actiony Cushing, who also brings his usual gravitas to things, selling effectively what is often a fairly ludicrous concept. The scene where he wakes from unconsciousness, realizes he has been infected, and what he must do as a result, is great, and surprisingly hardcore for its time. Monlaur provides attractive window-dressing, and the whole thing is just beautifully shot by Jack Asher. These qualities certainly overpower the flaws, and this is an enjoyable slice of nonsense, with Cushing’s typically marvellous performance at its core.

I’m quite surprised it took Hammer two and a half years to get round to releasing a sequel, considering what a smash the original film was. For comparison, The Revenge of Frankenstein came out barely a year after its predecessor, despite similarly having to make do without Christopher Lee. It appears he was unwilling to reprise the role of Dracula for fear of becoming typecast: probably justifiable, given what happened subsequently, though his career is not short of other memorable parts. His absence is certainly felt here, in particular when Baron Meinster bares his fangs. Lee was able to do so, while remaining both threatening and classy. Peel looks as if he’s auditioning for a role as a demonstrator in a joke-shop.

It takes more than half an hour before Van Helsing shows up. Until then, the film focuses on Marianne, and in general the film does live up its title. Between her, the Baroness Meinster (Martita Hunt), the Baron’s “familiar” Greta (Freda Jackson) and Andree Melly as another bride, it’s impressive gynocentric for a horror film from the beginning of the sixties. Admittedly, they are still defined in the title as spouses of a guy who isn’t even in the film. Of course, Hammer would make further entries about female vampires in a decade or so – even recycling the girls’ school setting. This, however, is considerably more chaste, and without lesbian canoodling. Indeed, the Baron nibbling on Van Helsing’s neck arguably is one of the more homoerotic moments in the company’s filmography. Their female vampires regularly snacked down on the same sex; their men did so, very rarely. 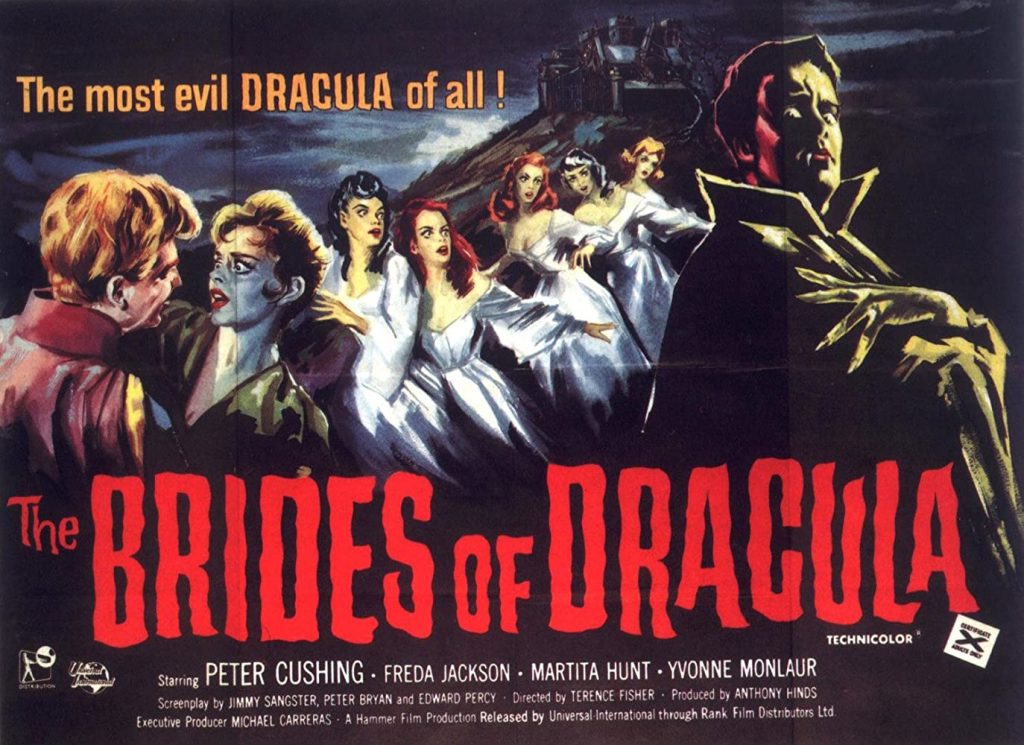 I’m not quite so sure about the finale, in which Van Helsing leaps onto the vanes of a windmill, making them form a shadow that incinerates the Baron. In previous films, and indeed, earlier in this one, while a brandished crucifix is capable of repelling vampires, there’s no indication of them being fatal. As Chris noted, there’s also something a little Ku Klux Klan-esque about the triumphant display of a burning cross with which the film finishes. Perhaps it’s a result of this ending not being the initial one. The original plan to destroy the Baron with a swarm of bats was discarded for reasons of cost (seeing how dreadful their one bat was, thank heavens!). And Cushing also vetoed the part where Van Helsing used black magic, declaring that not in keeping with the character. Save that kind of stuff for the Duke de Richelieu.

All told, this isn’t quite as good as the first, yet stands on its own more than adequately. I understand why Hammer opted to include the D word in the title, yet doing so inevitably means it can’t be considered “on its own”, and suffers in the comparison. Lee has become such an icon and archetype, it’s hard to watch someone else attempt to fill his cloak in the studio’s output, whether as a vampire by any other name. And if the Baron’s castle exterior looks oddly familiar, that’ll probably be because it’s Hammer staple location, Oakley Court. Even if you haven’t seen any of their films, you may still recognize it as Frank’s castle from The Rocky Horror Picture Show!