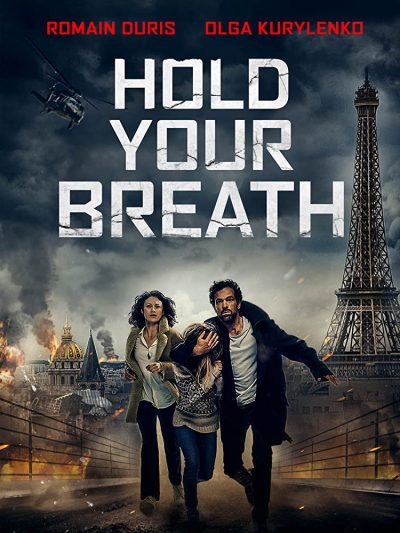 The human interest element focuses on Mathieu (Duris) and Anna (Kurylenko), as well as their teenage daughter, Sarah (Harduin), who has an immune deficiency which requires her to live inside an isolation chamber. One day, following a most unParisian earthquake, the streets fill with a poisonous white smoke, apparently released from underground. This proves lethal, and worse still, it sticks around rather than dispersing. Mathieu and Anna have to leave Sarah in her “bubble” and take shelter on the top floor of their apartment block with an elderly couple. But the batteries which keep Sarah safe won’t last forever, and this forces the couple to venture out onto the toxic and almost deserted city streets, to find the supplies needed to keep their daughter alive.

It is rather more front-loaded than your typical disaster film, with the smoke showing up within the first few minutes. Thereafter, it just kinda hangs about: an aftershock does cause the level to start rising, eventually forcing the parents out of their redoubt. It’s also quite small in scale, in that it focuses on one family, rather than the problems of society as a whole. There are pointers towards a refuge being organized, up by the Sacre Coeur on the higher ground of Montmartre. However, this is quickly crossed off as a potential destination, with Mathieu and Anna thrown back on their own resources. There are also hints throughout, suggesting that the gas may not be as lethal as it initially seems. I’m not sure the ending quite delivers a logical answer there.

If the plot is a bit hazy – much like the Parisian streets, hohoho – the film scores with an effective and creepy atmosphere (pun not intended, for once!). It feels slightly like The Mist, though in this case, it’s not what lurks unseen in it that’s the threat. You can argue that the scenario involved is rather contrived, and coincidence plays a greater part in proceedings than it should. Yet Roby succeeds in squeezing considerable tension out of the material than I expected. On more than one occasion, I found myself holding my breath along with the characters, as they tried to make it back to safety. That wasn’t easy, and I was just sprawled on my chair. Admittedly, I wasn’t desperately trying to save my offspring, either…