The eighties called. They want their slasher movie back. For beneath the startlingly generic title, tagline and poster, that’s what we have here. It’s a return to the days when horror meant a masked psychopath chasing terrified women around a lakeside location for an hour and a half. Which is entertaining for roughly about one-third of that time, due to the insane level of predictability in this. From the “She’ll leave her phone in the car” to the “He’s not really dead” moment at the end, we were calling this film’s shots before it took them. So what’s the point? On the plus side, it took Chris 39 minutes of running-time to go from “Let’s get a cabin by a lake!” to “Let’s not get a cabin by a lake…” 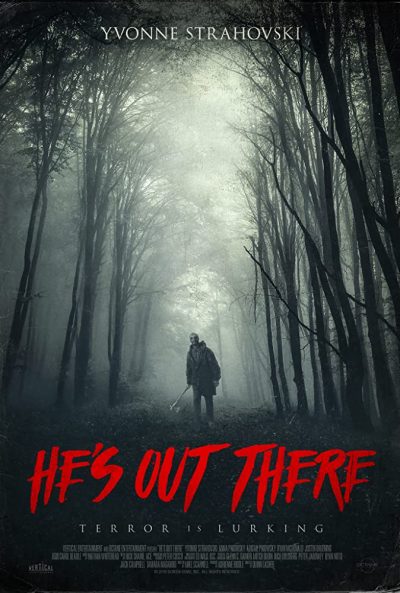 Laura (Strahovski) goes with her two young daughters, Kayla and Maddie (Anna and Abigail Pniowsky – I do appreciate the film apparently casting actual sisters as sisters) to their holiday home in the countryside. Dad has to finish up some work stuff, and will follow them later. Almost as soon as they arrive, the ominous events begin to happen, such as the girls being lured into the woods [never mind puppies or candy, it appears all you need is a bit of red string]. Then Maddie falls ill, communications get cut off, and attempts to leave are foiled. Finally, there’s the shadowy figure lurking on the lawn outside, who is about to end the lurk in no uncertain fashion.

About the sole point of note is illustrated by the still at the top. The killer (McDonald) is apparently an enthusiastic member of the arts and crafts movement. From baking cupcakes, through book illustrations to carving an entire dinner-party’s worth of full-size wooden mannequins, this is a killer who clearly believes in keeping himself busy – at least, when not chasing terrified women around a lakeside location. Given what we learned about him on the family’s arrival, he has clearly taught himself all these skills as well, and you’ve got to be impressed by that degree of being a psychopathic self-starter. #LifeGoals

I must confess to having some qualms about seeing small children becoming the targets in films like this, and have since Danielle Harris was the victim for much of Halloween 5. It just seems like a recipe for years in therapy. There’s a good chunk here where Kayla and Maddie have to fend for themselves, and it’s uncomfortable to watch. But, if the least-followed common sense rule of slasher film behaviour is, “Always make sure the killer is truly dead,” it gets turned around here, with the killer inexplicably failing to make sure a victim is truly dead. 5 points deducted from House Slasherin there.

While there are some moments of adequate tension, there’s little here you won’t have seen a hundred times before. Despite his handicraft skills, the killer is largely unmemorable. And it’s never a good sign when the smartest and most sensible character in a film is the small child.