Lucy (Grey) is an aspiring actress who has just started a new theatre class, and is bonding with her class-mates. However, this expansion of her circle does not sit well with her housemate, Sara (Chaiwanna), who senses these new friends will weaken the strong relationship between the two women. As Lucy continues to spend more time away, Sara’s frustration boils over and the two argue. The next day, they make up, Sara giving Lucy some pills to help with her headache. As wildlife documentary voice-overs say: “A fatal mistake…” The mes trigger a series of increasingly disturbing hallucinations and apparent premonitions in Lucy; will she be able to come out the other side, or is her downward spiral unbreakable? 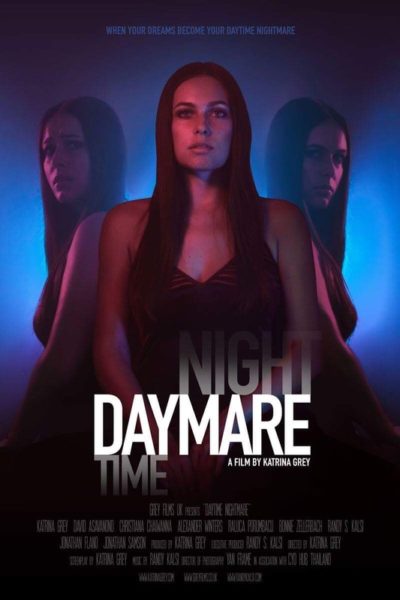 The audience is thrown right in at the deep end, the film opening with Lucy experiencing one of her neo-psychotic episodes, before we flash-back to her arrival at the acting class for the first time. We then see how things got to that point; if you can imagine a cross between Single White Female and Black Swan, you’re probably in the right general area. However, I didn’t find the progression of the story-line to be particularly effective. We’re not given enough insight into the relationship between Lucy and Sara, which makes the latter’s actions a bit unexpected. As for Lucy: well, friend or not, if I was given unidentified pills that led to the experiences these do, I would… Oh, stop taking them? Not continue, and mix them with alcohol. Really, we’re almost in “self-inflicted wound” territory there.

If you can get past that – and, to be fair, logic doesn’t need to be strict in a film about a mental breakdown – it offers some solid imagery. Writer/director Grey based it on her own experiences, and it does seem to give a glimpse into what it must be like to go through this kind of thing. This is probably at its best when delivering just a slightly off-kilter version of reality. For example, the scene at the top, when Lucy is going through a warehouse of mannequins – except here, some are played by real people. It’s almost Argento-eseque, and is probably the creepiest use of those dolls since the original Maniac. There’s also a great moment involving a mirror, about which I’ll say no more.

Still, this does seem, to some degree, to be almost “film-making as therapy,” and that’s a bit of a mixed blessing, at least for those on the outside. The key words there are probably “on the outside”. I never felt the viewer was brought far enough into Lucy’s head-space, to become a participant more than an observer. That’s something Black Swan did to a much greater degree, though Darren Aronofsky had considerably more experience than Grey, for whom this is her first feature. As such, there’s inevitably room for improvement, to be sure. Yet as debuts go, this is quite assured, and held our interest more than some previous “watching people go insane” movies.