It had been approaching eight years since the last time Lee had donned the cape and fangs to play Count Dracula for Hammer. But considering his top billing, it’s one of the least consequential leading performances in cinema history. Outside of the archive footage from Dracula with which this opens, the Count doesn’t appear until over 46 minutes in, then is on-screen for barely five minutes. And even when he is, Dracula doesn’t have a single line, he just hisses… There’s some dispute as to why. According to Lee, “I said to Hammer, if you think I’m going to say any of these lines, you’re very much mistaken.” But writer Jimmy Sangster disagrees: “Vampires don’t chat. So I didn’t write him any dialogue.”

Initially, it feels like the absence of Peter Cushing is going to be even more problematic. That flashback footage just shows, once again, how good he was as Van Helsing. However, Kier as Father Sandor, is a good stand-in. He’s sufficiently different to not feel like a cheap knockoff, replacing the science-based approach of Van Helsing with one inspired more (though not entirely) by faith. This stands out from the opening scene, where the rifle-toting man of God hijacks the funeral of a young girl, because the officiating priest intends to stake the corpse. He berates his colleague for being worried: “You are an idiot, Father. Worse than that, you are a superstitious, frightened idiot!” It’s the strong opening needed to establish him as an alternative to Van Helsing. 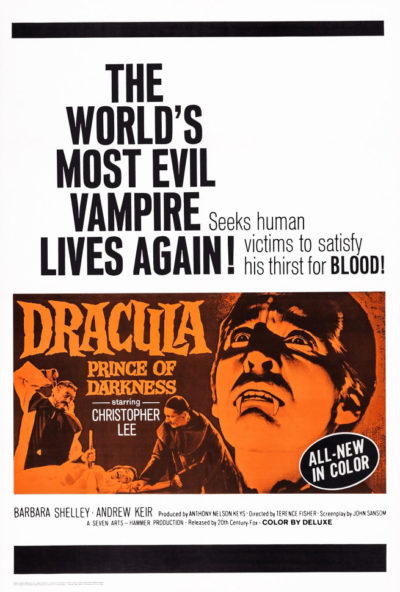 Events here take place a decade after the end of Dracula, though as the funeral suggests, the shadow of the Count still darkens the region. Into Carpathia come a pair of married couples: brothers Charles (Matthews) and Alan Kent, and their respective wives, Diana and Helen (Shelley). They encounter Sandor at an inn, and when he hears they’re heading for Karlsbad, warns them against visiting the (non-existent, according to their map) castle there. Of course, that’s exactly where they end up, despite Helen’s qualms. She initially seems a disapproving shrew, but let’s face it, her concerns prove thoroughly justified. They are welcomed by servant Klove (Philip Latham, channelling his inner John Carradine), who says his late master ordered the castle always to be ready to welcome travellers. Hehehe…

During the night, Alan is lured to the crypt and knocked out. In a remarkably bloody scene for Hammer at this point, his blood is poured onto the dust left behind by Dracula’s death. I must admit, I have questions. Why did this take ten years? More importantly, how did Klove gather it all up? Did he have to pick through it, and make sure it didn’t contain biscuit crumbs, cat hair and lint? Anyway, after a quick resurrection (Just Add Blood!), Drac’s back, and turns Helen into his bride. Though truth be told, she’s rather more fun this way, her strait-laced persona having loosened up considerably. Charles and Diana escape the castle after discovering the power of the cross, and are rescued by Father Sandor, who pauses only briefly for a well-deserved, “I told you so.”

From here, it feels almost like a remake of its predecessor. The two men team up to go after Dracula, and successfully free Helen from immortal damnation. [While shooting it, Shelley accidentally swallowed her fangs while being staked; worse, she then had to barf them back up for re-use, as there were no others available.] In revenge, the Count seduces and kidnaps Diana, making her drink his blood, and setting up a chase back to his castle. On its frozen moat, they shoot the ice out from under his feet, because vampires can’t cross open water, it appears – news to Bram Stoker, who put his Count on a boat – and he drowns. This scene almost killed Lee’s stunt double, Eddie Powell. After sinking below the ice, he struggled to find the oxygen bottles previously placed there. Fortunately, tragedy was averted, though the scene as it appears doesn’t do his efforts much justice. 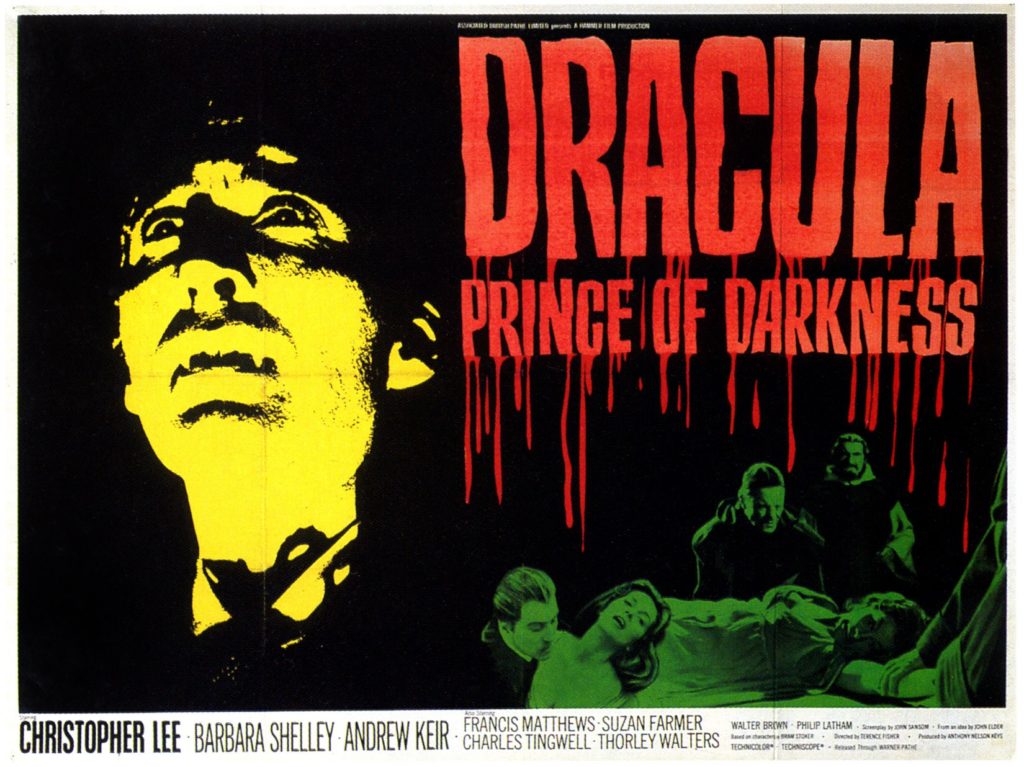 Overall, the bits around the edge aren’t too bad, with Keir and Shelley outstanding. It’s a shame Father Sandor was never to return to the screen; there was a spin-off comic, Father Shandor Demon Stalker, in the House of Hammer magazine. Just as impressive, Helen’s character arc from uptight madam, to writhing orgasmically as she gets staked (top), is one of the most dramatic in the franchise. But, overall, it definitely feels less satisfactory overall than the last time we saw Lee in the role. The lack of anything much for him to do is part of the problem, certainly. He just seems like a monster here, more in line with a Jason Voorhees than the urbane and civilized aristocrat we first met in Dracula.

In particular, I’m not a fan of Matthews, who works better in supporting roles, such as the one he had in The Revenge of Frankenstein, than as a leading man. He would go on to voice Captain Scarlet in the Gerry Anderson puppet series, and his performance here seems equally wooden. Suzan Farmer, as his wife Diana, initially seems like she might be perkily independent, but after the couple escape from the castle, her character crumples into the standard damsel-in-distress formula. Compared to Brides of Dracula, it’s a step back for female empowerment from Hammer, with the women all subservient to their menfolk, on both sides of the undead divide.

Despite its flaws, not the least being a star who appears at a “may contain traces of” level, the film was a commercial success, and is generally quite well-regarded these days. It definitely has the Hammer “look”, in its sumptuous sets and lush Techniscope photography. Perhaps most importantly, it brought Lee back to his iconic role. His loud protestations notwithstanding, going forward he’d continue to play the character regularly, and cash the cheques – though the role would not necessarily be more meaningful.