I’ve been watching, and writing about, incredibly bad movies for over 30 years now. But The Room is a virtually unparalleled phenomenon in that field. It was initially a horrendous flop: the feature reportedly cost $6 million to make, and grossed just $1,800 on its opening weekend. While other movies have overcome a poor start to achieve success, few have generated such cult-like devotion, worshipped at screenings worldwide. And none have been so revered for their relentless awfulness. Yet, for a variety of reasons, this student of badfilm had passed on joining the Church of The Room. I hadn’t even seen what was, arguably, the most well-known example of the genre since Plan 9 From Outer Space.

That has now been rectified. Though I suspect, my viewing may not have been the best suited to appreciate its merits. The Rocky Horror Picture Show is a radically different beast, when experienced at a midnight show, alongside its devotees. Similarly, The Room may be a less entertaining experience, watched on your own, on a Wednesday afternoon. But even my long-suffering wife, who has sat through her fair share of shitflicks, politely declined a shared viewing. [I will neither confirm nor deny the presence of derisive snorting] Under those circumstances, what’s a connoisseur of incompetent cinema to do? We soldier on. I’m sure our cats appreciated the witty commentary I provided, as events unfolded on-screen. The hairball coughed up by one, could perhaps be interpreted as feline film criticism. 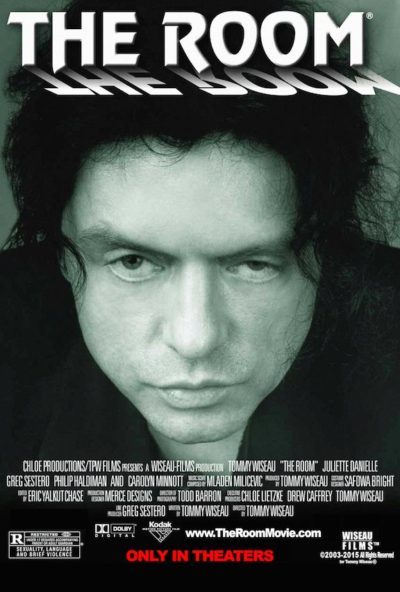 So, is The Room the worst film of all time, as multiple publications have definitively stated? No. Not even close. You cannot spend six million dollars on a drama, without acquiring (even accidentally) a certain amount of technical competence, something which is anathema to true contenders for the title. The Room was in focus, and the dialogue was audible. I’ve seen plenty of movies about which the same cannot be said. But is The Room the worst film to have cost that much money? Ah, now you might have an argument. It certainly proves putting auteur theory into practice doesn’t necessarily lead to good results. Not when the auteur in question appears devoid of talent in producing, writing, directing or acting. Let’s dig into each of those areas and find specific examples of the issues.

Producing. Film-making is collaborative. You bring people on board for the various departments due to their experience, and because they know better than you about their area. You then defer to their expertise. By all accounts, Wiseau appears to have rejected this, refusing to listen to other opinions. Few things are more telling here than the end credits which list five PAs for him. The casting is also… interesting. Denny plays like a creepy 14-year-old, yet actor Phillip Haldiman is 26. Dan Janjigian, who plays gangster Chris-R, was making his debut, fresh off representing Armenia in the two-man bobsleigh event at the 2002 Winter Olympics (he finished 33rd). The actor playing the role of Peter, left the film for another job. Producer Wiseau handled this, by simply turning the character into a completely different one, Steven, with no explanation. Then there’s building an entire green-screen set up for a roof-top, rather than… oh, using an actual roof-top?

Writing. Oh, where to start? It’s not a very interesting plot to begin with. Johnny (Wiseau) is being cheated on by his girlfriend, Lisa (Danielle) with his best friend, Mark (Sestero), despite their looming marriage. It’s sub-soap opera stuff. Even Wiseau seems to realize this, dumping in scenes like the one where Chris-R confronts Denny over a debt. Key word: dumping, for the debt is unmentioned, before or after the single scene. This is, however, a masterpiece of plot integration compared to Lisa’s mother suddenly proclaiming, “I got the results of the test back. I definitely have breast cancer.” After a few seconds of desultory reassurance from her daughter, this bombshell, too, is abandoned and never referred to again. And what is up with the multitude of scenes Wiseau wrote, where guys toss a football around, for no purpose?

However, perhaps the most outstanding feature is the dialogue, exemplified in the plethora of “Oh, hi, <character>” lines, which litter the plot. Admittedly, there are a lot of cases where people just wander into Johnny’s apartment, often without bothering to ring or knock. They must be greeted. But the Oh-his get shoehorned in everywhere, most incongruously when a furiously ranting Johnny goes up to the building’s roof: “I did not hit her. It’s not true. It’s bullshit. I did not hit her. I did not. Oh, hi, Mark!” The dialogue is certainly a key factor in the film becoming so infamous, not least because the lines lend themselves particularly beautifully to getting memed. That is something which is almost essential for success in these days of social-media. 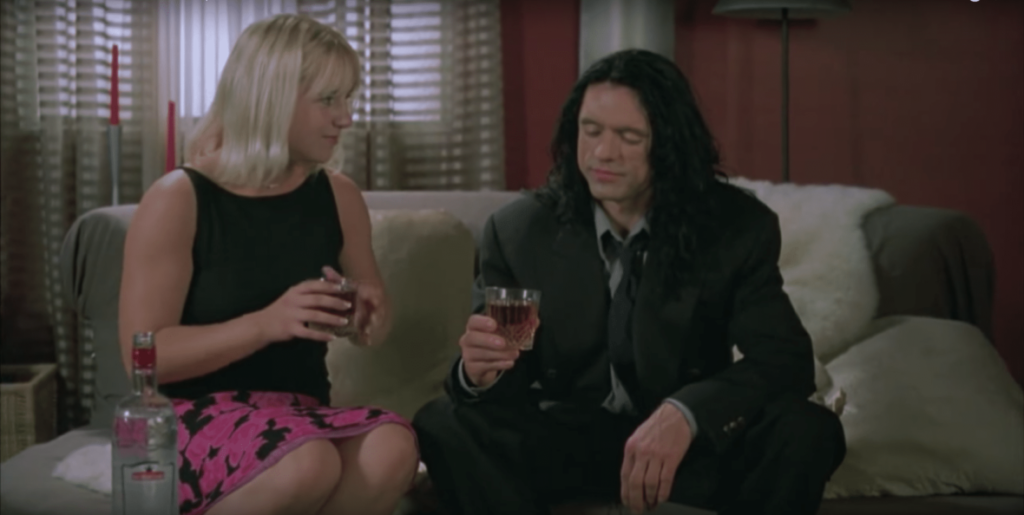 Direction. The lines between this, writing and acting are kinda blurred. Is it the line which is responsible, or its delivery? And if the latter, whose fault is that: the actor’s or the director’s? In most cases, I’d have to blame the director, because it’s up to them to identify an issue and do another take. But the almost continuous failure of The Room to generate the emotion for which it is aiming, has to be blamed on the director. Nowhere is this more apparent than the end where [spoiler warning, as if it really matters] Johnny, distraught at discovering Lisa and Mark’s deceit, blows his brains out. Like in so many other places, the tone in which this gets executed is completely off. It it provokes anything, it’ll be laughter. The same goes with the sex scenes, taking place at 7, 17 and 27 minutes in [you can set your watch by them], to a background of crap R&B music. If you find these the slightest bit erotic, I would recommend therapy, stat.

Acting. The first problem is, Johnny isn’t the right character for Tommy. He’s just not a romantic lead: Wiseau is the only director who would cast Wiseau as such, when his look is more suitable for an aging heavy. This may play into why the sex scenes are underwhelming; when a director casts himself in his own movie to have sex with anyone, it can’t help but feel creepy. Then, his delivery of lines seems to have only two speeds: inappropriately dead-pan (“Ha-ha-ha. What a story, Mark.”) and wildly over-acted (“YOU ARE TEARING ME APART, LISA!”). To quote Dorothy Parker, he runs the gamut of emotions from A to B, not helped by his heavy accent. Like so much (How old is he? Where did the money come from to make The Room?), Wiseau’s origins are mysterious, but Poland appears a decent best guess.

There’s hardly a scene where one of the above doesn’t interfere with the intended cinematic outcome, and there are many where they combine, to more or less delirious effect. Perhaps the finest single moment is the flower-shop scene (above). Discounting the shots of Johnny parking his car at the kerb and walking to the store, it’s less than twenty seconds in length from entrance to exit. It is entirely pointless, yet Wiseau not only shot the scene, he then redid the dialogue in post-sync – you can see the audio not matching the lips. It’s not even internally consistent, despite its brevity: the shop assistant goes from “I didn’t recognize you” (like, the accent wasn’t a clue?) to “You’re my favorite customer”. We get two “Here you go” lines as well as the ubiquitous “Oh, hi <character>”; Johnny also says “Hi” to a dog. The more you watch it, the more it will feel like you’ve fallen through a wormhole into some bizarre, alternate universe.

I will say, if I’m going to watch a bad movie, I’d rather watch one with considerably more nudity and gore, than something that, even if it was successful, would end up as little better than soap-opera. To be honest, I probably found Verotika more purely entertaining than The Room, simply because the former is in a genre with which I have a greater connection. Bad horror will always provide greater amusement than bad drama. I may never watch The Room again, and am fine with this situation. But I have enormous respect for Wiseau, who is the living embodiment of the Oscar Wilde quip, ‘There is only one thing in the world worse than being talked about, and that is not being talked about.’ Regardless of the reasons, he has embraced people’s adoption of the film in a way Ed Wood never could. He seems genuinely happy his film is giving pleasure to its audience, however it may be. There’s a lesson there for us all.