A grindhouse-style film starring a Barrymore and a Carradine? Unfortunately, in this case, it’s Drew’s half-brother and David’s son. The rest of the film is roughly as disappointing, and largely underwhelming. Sally (LaMay) is hitching home to Colorado to see her father. Unfortunately, her route takes her across the hunting grounds of a killer who has been abducting young women, and selling them for body parts to the Mexican cartel. Abducted deep into the depths of the woods, can she escape before becoming an a la carte menu of unwilling organ donation? 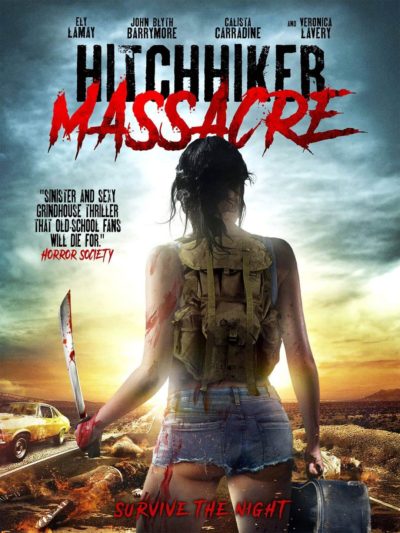 It’s pretty basic stuff across the board, from plot through the characters to the gore. I watched this only a couple hours ago, yet there are already few specific moments that I could recall. Either I’m getting old and absent-minded – always a possibility – or this was eminently forgettable. Bills tries to jazz up the opening few minutes with faux film scratches, and even the ‘Reel Missing’ gag. This is presumably an indication of the direction he is aiming, but it doesn’t succeed very well, and it’s probably wise the conceit is quickly forgotten.

It doesn’t help that the film is largely unable to deliver on those grindhouse aspects. It teases the sex with a scantily-clad hitcher being picked up by a sleaze sleazeball in a sports-car. Only, this turns out to be just a bit of relationship role-play, and there’s considerably less skin the rest of the way than I was expecting (okay: hoping). At least LaMay does a decent job as the heroine, being relatively plucky and sensible, by the standards of the genre.

It feels almost as if Bills isn’t sure his script has enough to hold the audience’s interest. That would explain the tacked-on subplot involving the local sheriff and his investigation. Apparently thirteen girls had gone missing, so the authorities appear a bit slow on the uptake here. Rather more amusing is the guy who is getting taken to the cleaners by his wife in a divorce settlement. Initially, this appears wildly irrelevant, until a fleeing Sally stumbles into his campsite in the middle of the night. He ends up being close to the film’s most sympathetic and memorable character.

Though I must confess to being somewhat intrigued about the “true events” on which this is allegedly based. I’m thinking perhaps the unsolved Santa Rosa hitchhiker murders of 1972-73? In these,  the bodies of at least seven female hitchhikers in the North Bay area of California were found nude in rural areas near steep embankments or in creek beds near roads. Possibly as many victims again have been linked to the perpetrator, with the Zodiac Killer, the Hillside Stranglers and Ted Bundy among the suspects at various points. That I a) was looking this up during the movie, and b) am copy-pasting from Wikipedia to reach my intended word-count, should tell you everything you need to know about the qualities of this feature.