This arrives on a slew of scathing reviews, some of which call it the horror equivalent of The Room. The parallels are particularly apparent in both being passion projects, in this case for Danzig, better known as a musician with his band, The Misfits. Oh, and both being films where the entertainment value is in their jaw-dropping awfulness. That became clear here, when one of the first bits of dialogue was – and I paused the movie to write this down – “Your tits! They’re looking at me!” More or less consistently thereafter, we get a series of poor decisions. On that basis, it’s a gift which keeps on giving, and that explains the grade here. Do not make the mistake of thinking this is any good.

It’s that staple of horror, the anthology, and these do tend to be a bit variable. That isn’t the case here: all three stories are quite awful. After a quick introduction by a narrator (Kross), we’re into the first: The Albino Spider of Dajette, which gives us the priceless line quoted above. It’s actually accurate enough, for Dajette (Wisdom) has eyes where her nipples should be. Why? It’s never explained. After her latest partner is a bit freaked out, they shed tears, which fall on a passing arachnid. This turns into a large human/spider thing. Why? It’s never explained. This creature looks like a mediocre Halloween costume with four blatantly immobile arms, and roams the streets whenever Dajette is asleep, killing people. Why? [All together now!] It’s never explained. This film is apparently based on some comic books, but even by their low standards of narrative quality, this is… not good.

The most obvious bad choice here is setting the story in Paris, for no reason. This forces everyone to adopt fake French accents so bad, Inspector Clouseau would snort derisively. This does not help the delivery of lines such as, “The police are calling the murderer, Le Neckbreaker,” or “It is only people making sex.” We also get to discover Danzig’s directorial style. This consists of every scene either running too long, to the point where you wonder if he fell asleep and forgot to yell, “Cut!”, or being joined half-way through. The latter shows up when Dajette apparently walks into a restaurant, sits down, and is greeted by the waiter asking, “Would you like another refill?”

This eventually ends in Dajette taking a drug overdose to escape, and viewers may be contemplating something similar. Though the French police are remarkably blasé about finding the bodies of a giant psycho spider and a girl with an all-seeing bosom. “Well. There you go” says the narrator, and you can hardly critique such a reaction. It’s then on to the second segment, Change of Face. This is basically a rip-off of Les Yeux sans visage, with Mystery Girl (Alig) roaming the city, cutting the faces off women to cover her own disfigured visage. Except, when we see it… well, her complexion is probably better than mine. 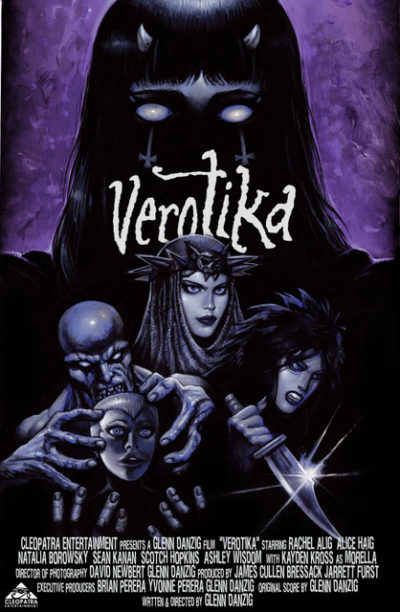 This section is basically an excuse for strip-club sequences. Which I’d usually be all in favour of, except the ones here are truly shit. Mystery Girl gets not one, but three and a half such routines (one is interrupted). They are all basically the same. She comes on stage, waves her cloak about like she’s being attacked by angry Asian murder hornets, fails to remove any clothing and leaves the stage. I guess she’s called Mystery Girl because it’s a mystery how this girl ever got a job as a stripper. And I’m not sure what the point of her larceny is, since she’s wearing a mask the entire time. This is likely the worst of the three sections, mostly due to some incredibly clunky dialogue. First example, between two cops at a crime scene:

Or then there’s this exchange between Mystery Girl and a victim.

You could be an Oscar winner and have problems with that dialogue. But instead, the credits of cast members in the film include My Stepsister Squirts 3 (Dajette) and Chloroform Bondage Silences Feisty Females (the Narrator). It does not go well. Authorities finally close in, thanks to the perp leaving a business card at the scene of the murder. From this, we learn the name of the establishment is “Pussy Cats”, although due to an unfortunate choice of typography, it looks more like “Puggy Cats”, which may explain the lack of customers. Mystery Girl escapes, but we get an entirely unnecessary “six months later” coda, where she’s now working at a strip-club as “Mysteria”. That’ll stop anyone finding her.

After a further brief interruption from the star of No! Please Don’t Tickle Me There, it’s on to the final segment, Drukija: Contessa of Blood. It’s basically Countess Bathory, so why Danzig needed to change the name escapes me. Naturally, we are back with Shitty Accents v2.0, this time of the middle-European variety. Danzig goes for the over-long scenes here, big time, first with Drukija riding through the countryside in front of whispering peasants. But the piece de resistance is the 5½-minute section depicting Drukija taking a bath. Admittedly, it is in blood, and includes a surprisingly decent throat-slitting (above – that and an opening eye-spearing by Ms. Struggling Starlets’ Bondage Peril are the best gore here).

Still, charitably, it is a good four minutes too much. It does illustrate another problem: there’s no development in any segment. They all just consist of repeating the same element a few times, whether it is spider murders, face rippings (or, arguably, strip routines) and, here, blood wallowing. This one fails to escalate up to the point where Drukija tells a victim she will drink their blood before having them decapitated, and exchanging ‘witty’ barbs with the severed head (“Nothing to say?”) . She then wanders off with the trophy, having completely forgetting about the whole blood-drinking thing. If I’ve described this part in less detail, it’s likely because I was losing the will to live.

Another aspect it shares with The Room is there was clearly some money spent here, albeit to no great success. The technical aspects are decent, and the production values reasonable. The problem is most likely that Danzig surrounded himself with a slew of fawning acolytes, who were too scared to point out the flaws in the writing, performances, direction and editing, all too painfully obvious to the rest of us. You can compare and contrast, say, Cradle of Fear, which takes a similar, anthology-based approach to its combination of music and horror, but succeeds to a far greater degree. Still, there’s something fascinating here, even if it’s just a glimpse into an unfettered ego. Should you run out of dashcam car-accident videos on YouTube, this is a viable alternative.