To my surprise, this didn’t suck. There, that’s a quote for the poster. Really, I was expecting something about the level of a SyFy movie, and it’s nowhere near as bad. It helps there was a reasonable budget, and with Bulgaria standing in for New York (shockingly well). This is clearly the kind of movie that could only be made in Eastern Europe, where CGI arachnids are cheap. But veteran director Takács – whom the IMDb informs me has now carved out a career directing Hallmark Christmas movies, of all things – keeps things moving briskly. 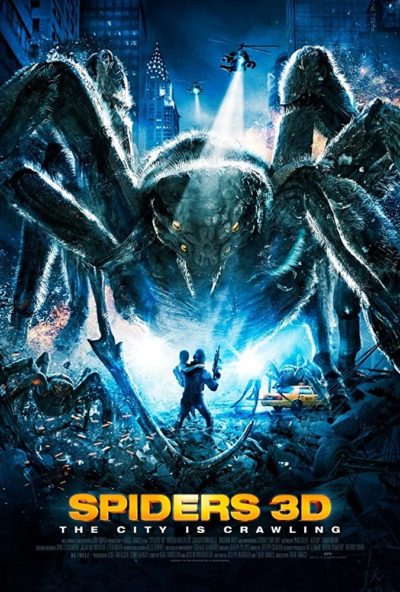 Jason Cole (Muldoon) works for the NY Transit Authority, and is on duty when a chunk of Russian satellite crashes to earth in the subway. The employee sent to investigate ends up dead, supposedly electrocuted, though Jason is doubtful. He’s right. Turns out the debris was home to a secret military project, breeding extraterrestrial spiders found by the Russians in a crashed spaceship. The US military, under Colonel Jenkins (Hope), want to get their hands on the critters, and when Jason, his convenient-scientist wife Rachel (Campbell) and their daughter (Sweeney) get in the way, they become part of the problem. Though probably not as much as the spiders, which are rapidly increasing, both in numbers and size. The smaller ones can be squished. Medium-sized ones, dispatched with a forklift truck – though I’ll never forgive the film for not having Jason yell “Fork you!” as he does so. But how to get rid of Big Momma Spider, roughly the size of a building?

This doesn’t hang around, the spiders plummeting to the ground in the first few minutes, and is admirably quick-paced thereafter. Despite being shot in 3D, it plays reasonably well without it – outside of the opening credits, there’s little obvious pandering to that gimmick. Muldoon makes for an affable hero, and clearly has experience of dealing with giant bugs, from his time in Starship Troopers. Less successful are the attempts at generating family drama – I can’t even remember the daughter’s name, can’t be arsed to look it up, and would have skipped the whiny bitch’s birthday too. I did like the conspiracy angle. The military using a “virus” to cover up a bigger threat has acquired a certain resonance in the current era, shall we say. IT’S NOT COVID-19, IT’S GIANT SPIDERS!!!!

Sorry, where was I?

The spiders themselves are not exactly top-tier, particularly when the humans try to interact with them. Indeed, Troopers was considerably more effective, despite predating this by more than fifteen years. However, with their grumpy little faces and roaring – yes, roaring spiders – they are weirdly adorable, and the film is clearly proud of them, with lots of spidery action to enjoy. Let’s be clear, this isn’t among the greatest of such things; it’s likely not even in the second division. Yet, ninety minutes passed tolerably enough, with crawlies which overall provided an acceptable amount of creep.