It’s an anthology of sorts, with four tales linked by Cradle of Fear lead singer Dani Filth’s presence as an angel of (spectacularly messy) death, operating on behalf of a jailed killer, and Dehn as the cop investigating the resultant mayhem. As with all anthologies, the stories vary in quality; the first stars Bouffant as a goth slut who has sex with Mr. Filth – not a wise move, really. This one is fabulous, containing some genuinely disturbing imagery, and it also yanks the rug out from under you in truly spectacular fashion. Opening with it is wise, and leaves the viewer permanently unsure of what to expect for the rest of the movie. Second up is a tale of falling out among thieves, and retribution from beyond the grave – while the idea is fine, the acting perhaps left a bit to be desired. 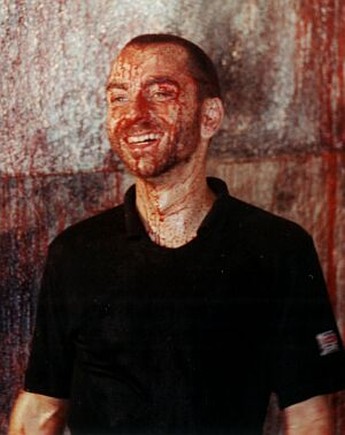 The third features Eileen Daly, in a tale of possessed limbs; there’s perhaps not much new in the story, but it does have another completely unexpected twist which again whips the legs from beneath (and that’s a particularly apt comment). The fourth part is a surprisingly moralistic tale about the dangers of looking at sick stuff on the Internet – you might be able to tell where this one is going, yet I can’t deny it’s still fun. Everything leads to a truly splattery finale, when all the threads come together to paint the walls rhesus-negative.

However, mere plot-summaries don’t do it justice – the pic of Alex Chandon on the right comes much closer to capturing the gleefully icky spirit of enthusiasm! Technically, he has come a long way since the days of Bad Karma, or even Pervirella, yet has clearly lost none of his imagination and invention. The effects vary from serviceable up to terrific, and most of the performances do likewise – Filth exudes charismatic evil at a level rarely seen outside a secure facility.

The end result is something which is not just one of the bloodiest movies of all time, it’s one of the best-executed pieces of hardcore horror of the past decade. Entirely uncontaminated by the poison of smug self-awareness, Cradle is a simple, straightforward, old-school gore flick, perfect viewing for a Friday night beer and kebab session.