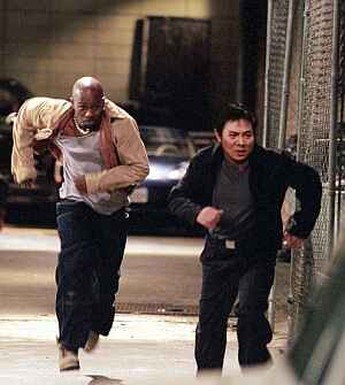 Both Romeo Must Die and Exit Wounds had a martial artist, black music stars, and Bartkowiak directing, so perhaps it’s stating the obvious to say that there’s nothing new here. Li plays a Taiwanese intelligence agent, on the trail of some “black diamonds” which DMX steals from Mark Dacascos. [I’m not using the characters’ names because they are largely forgettable, save perhaps Tom Arnold’s Archie, a merchant of anything up to and including a tank.] I also question the science involved, which is at best unintelligible, and at worst, palpable nonsense (such as the way Dacascos is finally dispatched…hey, you expected him to survive?). And don’t even get me started on the irritating child, or gaping plotholes such as Li conveniently forgetting to check that the bag he takes actually contains the merchandise.

However, these are, fortunately, sideshows to the main event. What it does, it does with competence, and that’s showcase interesting ways of beating people up – reject any attempts to convince you otherwise, Jet Li is the star of this one. There are times when he seems so at ease that he uses only one hand, or his feet, to fight, and these moments of grace are sufficient to excuse all the above flaws. This is despite Bartkowiak’s insistence on jazzing it all up with flashy camerawork and editing, when you really want him to just point the camera and let Li roll. The finale also manages to feature three separate fights at the same time, which would have been nice to have seen consecutively. But any film which features a midget being wielded as a weapon will always receive a bonus point or two on our scale.