This starts off by being rather salacious, with the jungle goddess (Michael) flouncing around the jungle in little more than a loin cloth, her hair doing its best to cover her bosom. It’s all particularly questionable, since Michael was only 15 when she was plucked from 12,000 alleged applicants, signed to a long-term contract by the studio and promoted as the next Brigitte Bardot. The fact you almost certainly haven’t heard of her, tells you how well that worked out for everyone concerned. Anyway, Liane encounters an expedition, rescuing team photographer Thoren (Krüger) from the tribesmen with whom she lives as their white goddess. Naturally, the team’s reaction is to trap Liane in a net, rescue her from this savage existence and take her back to civilization in Hamburg.

Word of their find gets their first, and shipping magnate Theo Amelonger wonders if this could possibly be his long-lost grandchild, Liane, who was missing after the ship on which she and her parents were travelling, went down off the African coast years earlier. Less enthusiastic about that prospect is Amelonger’s nephew, Viktor Schöninck (Nalder), who would otherwise have been in line to inherit his uncle’s business empire. When Liane, Thoren and Dr. Jacqueline Goddard (Galter) return to Hamburg, he seeks to discredit the new claimant by whatever means are necessary. Eventually, this causes him to kill his grandfather, attempting to frame Liane’s jungle servant Tanga for the murder, as the film suddenly turns into something out of Sherlock Holmes. 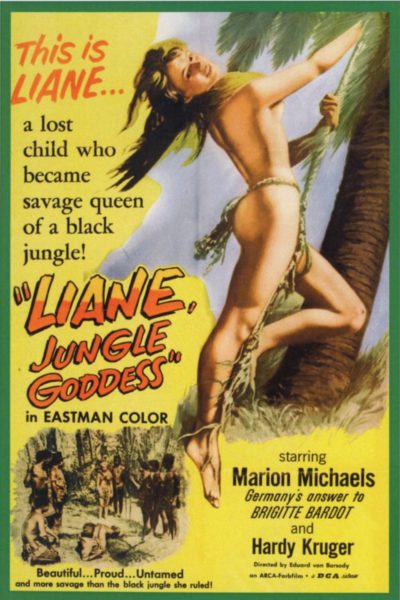 In fact, it’s not the first abrupt diversion. Considering the title of the film, it actually spends remarkably little time in the jungle, especially if you discount the stock footage of exotic animals at the beginning. This may be partly because the film didn’t get any closer to Africa than a tropical park in Italy. Which apparently had a toucan, since we see Thoren taking pics of it. Can’t blame him, since it’s a South American species, not found in Africa. Oh, well: an exotic animal is an exotic animal, am I right? After less than half an hour, they take the jungle out of the girl, dressing Liane “properly” in a tied-up shirt and shorts, and not long after that, they take the girl out of the jungle.

It then becomes a “fish out of water” tale for a spell, as Liane tries to come to terms with the trappings of modern civilization in Germany. Such as shoes, running water and beds: she prefers to sleep on the floor beside Thoren, Speaking of whom, the film lobs in Dr. Goddard’s largely unrequited attraction for him, while another member of the expedition, Tibor, holds a candle for Jacqueline. None of these romantic threads appear particularly resolved by the end, which sees Liane paying a return visit to the jungle, and swimming with Thoren. Since Krüger was in his late thirties, easily twice the age of the young actress, their relationship adds a whole new level of awkwardness for the modern viewer.

However, Thoren’s completely blase disavowal of any attraction to or interest in Liane, helps lends proceedings a much-needed air of innocence. It has to be said, there’s rarely any genuine sense of salaciousness: the sexual content is even lighter than the naturist movies which were rolled out in the fifties, after the landmark case in which Garden of Eden was cleared of obscenity. Indeed, for the first seventy minutes, until turning into a whodunnit, it’s light romantic comedy, and as such, is both inoffensive and forgettable. Nader, who is probably best known for Salem’s Lot, makes for a decently slimy villain, while Krüger is a square-jawed, thoroughly Teutonic hero. A dozen years earlier, he and Liane would have made a perfect poster couple for the Office of Racial Purity,

On the topic of race, it is, naturally, as sensitive a portrayal of native people as you would expect given the tagline, “A lost child who became savage queen of a black jungle!” Except, Liane is definitely not savage. She’s the restraining influence which stops her people, the true savages from killing – and, it’s implied, eating – Thoren. There’s also bonus nudity from them, but since they’re black boobies, they don’t count, under the National Geographic exemption clause. None of the local folk get to have any real agency, save for Tanga, who stows away on the ship: even that is simply in order to go along with his mistress (and her adorable lion cub, pictured above). 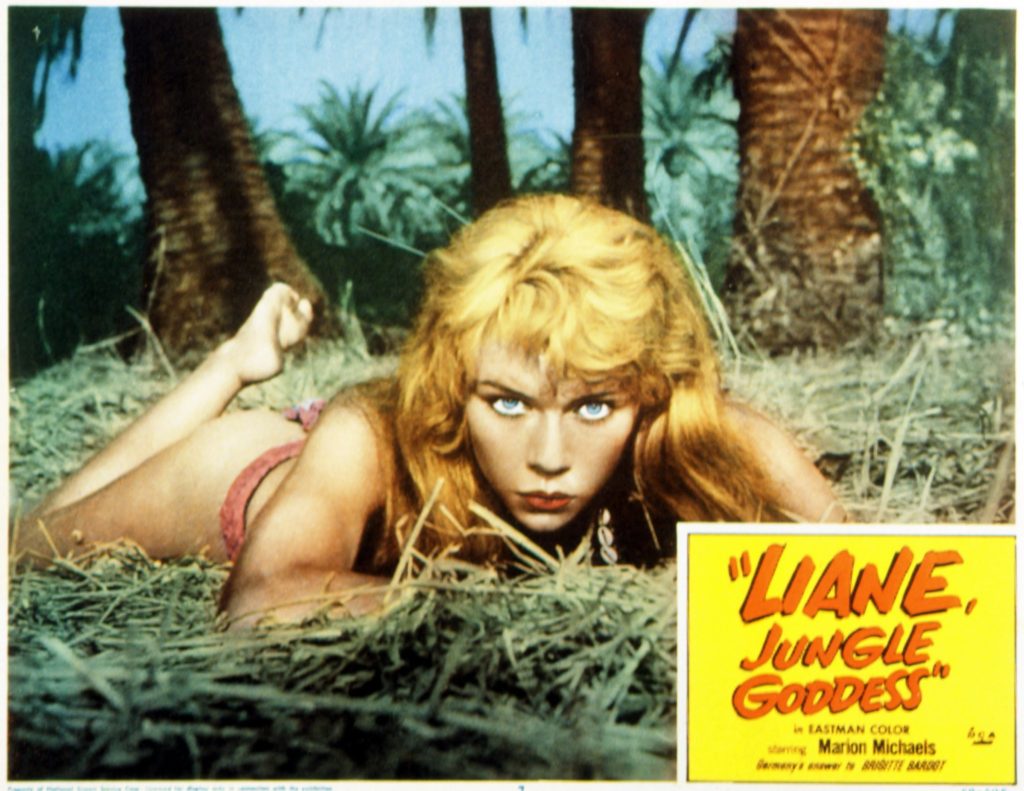 Slap a top on Liane when she’s in her tropical environment, and this would feel like it could have been a Disney live-action film of the period. Given the marketing, it’s really remarkably family-friendly, and perhaps even teaches good moral lessons about… er, well, not stabbing uncles to get your inheritance, I guess. It’s entirely unchallenging, and is likely better when it isn’t trying to provide a poor imitation of the African jungle, being on firmer footing in its own native territory of Hamburg. It’s harder to say if Michaels lives up to her billing: beyond the looks, Brigitte Bardot was actually capable of delivering lines, something with which Marion is not challenged here, beyond a few words of basic English, so the jury is still out on that.

In the longer term, however, history snorts derisively at that comparison. There was one further Liane movie for Michaels, but her career seems to have petered out after that, and is largely forgotten. The same goes for this entry in the jungle girl sub-genre. There are both better and more entertainingly worse entries to be found, leaving this occupying an uncertain middle ground of bland semi-competence. It does feel as if the film-makers couldn’t come to any decision about what they were trying to make, and so ended up with a stew of various ingredients, not all of which work well together. I’d call it a light curiosity, not particularly worth seeking out, yet not worth avoiding either.