“A place some have referred to as hell… A world that might only be fit for the devil himself. This is a land full of violence, where outlaws, pistoleers, deserters and murderers have been calling home for the past few years.” That’s how the heroine, wide-eyed journalist Annabelle Angel (Taylor-Compton) describes the lawless community of Apache Junction, Arizona in 1881. Though, to be honest, it’s not that different from its reputation these days. Just add meth, though I can’t speak to the accuracy of such reports. She shows up, intending to write a story about the place, which operates under the dubious supervision of Captain Hensley (Adkins). It’s not long, naturally, before his men try to get a bit rapey, and she is rescued by Jericho Ford (Townsend), kicking off escalating tensions between the Army and the local population of miscreants. 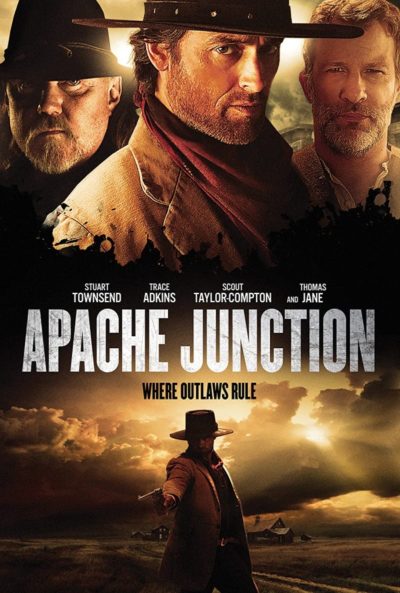 Firstly, this is another case of Fauxrizona, with the movie actually being shot in New Mexico and California. It’s a shame, since the real Apache Junction has quite a rich history of film-making itself, apparently including How the West was Won and Elvis Presley’s Charro. However, the area’s main movie studio, Apacheland, was destroyed by a fire in 2004, and that ended the area’s cinematic activity. Hey, 200 words in, and I’ve barely discussed the film. Probably not a good sign, you’re thinking, and in this case, you would be correct. It’s a strikingly low-energy effort in almost all aspects, with a plot which largely forgets about Annabelle, and a preference for talk over action.

What of the latter exists is notable only in its dullness. For example, there’s an early bar brawl between Jericho and a large bruiser in the local saloon. Only, damage is carefully restricted to a couple of glasses, and the whole thing feels like the opening bout in a lower tier indie wrestling fed, between a couple of curtain jerkers. Matters do not improve thereafter, as Hensley and his crew seek out Jericho. Annabelle, who was initially set up a strong, independent woman, is reduced to cowering in the corner. Meanwhile, the new hero has to deliver lines such as, “I’m gonna see if the devil can bleed,” while the score does its best to rob every scene of tension.

Things escalate – for a very loose definition of the word “escalate” – to the inevitable confrontation between Jericho and Oslo Pike (Morrone), in the dusty streets of Apache Junction. It’s not clear the time of day at which this takes place, but based on the film’s lack of invention, I imagine some point between 11 a.m. and 1 p.m. About the only twist is their duel being turn-based: maybe Justin Lee is a fan of Dungeons & Dragons? There is no particular sense of resolution either, with the bigger issues e.g. Jericho having killed multiple soldiers, left unaddressed. It’s all thoroughly generic, and feels about sixty years too late. If the Western genre is dead these days, this kind of film is the disease rather than the cure.