I have to say, the title here does a rather good job of robbing the film of suspense. After the family of American writer Agnes Keith (Colbert), her British husband Harry (Knowles) and their four-year-old son George (Keuning) are imprisoned by the occupying Japanese in 1942, the main question for the contemporary viewer is, who will survive? But that trio of words, writ large on the poster, let you know the answer on the way in. It’s as if Psycho had instead been titled, “Watch out for the Creepy Bloke in the Motel” or Citizen Kane, “Rosebud is the Sled.” That aside, this is largely a solid chunk of drama, set and partially filmed in Borneo, where Harry works for the Empire. 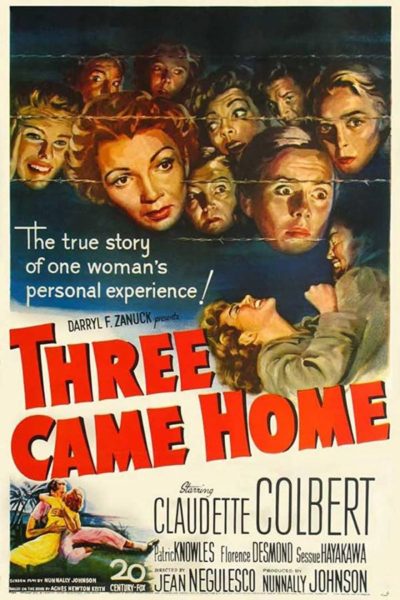 It does a nice job of setting up the slowly growing tension, with the locals knowing it’s only a matter of time before the encroaching Japanese army arrives. When they do, under Colonel Suga (Hayakawa), it’s still almost a “phoney war.” Though there’s one especially effective conversation between Agnes and the Colonel, where he compliments her book – only for the polite discussion to be repeatedly interrupted by gun fire. Eventually, the family is split up and shipped to interment camps: Agnes and George in a women’s camp, while Harry is sent elsewhere. Then it’s a long haul of near-starvation, disease, intermittent cruelty – though Suga behaves better than his subordinates – and an ever-present threat of execution, for the next two-plus years.

This is all somewhat rote, and the standards of the era result in the travails being underplayed. For instance, a guard attacks Agnes at night and, I guess, rapes her. Not that you’d really know it from what’s on-screen. That kind of thing makes this a very gentile internment camp. Though Colbert did, apparently, suffer a very genuine back injury during one of the torture sequences, an ailment which forced her to drop out of All About Eve. Bette Davis took over the role, and was Oscar nominated. But there is genuine emotion as well, and it’s easy to feel the pain of Agnes’s separation. Even if you know what’s coming, the last few minutes remain tense and effective.

Perhaps the most interesting character is Suga, who is played rather sympathetically, especially considering this was made just a handful of years after the end of World War II. Like the heroine, he was a real person: the Colonel committed suicide after the war, before his trial as a war criminal. Yet it appears he also repeatedly ignored orders to execute his prisoners as the war came to a close. There’s a particularly moving scene where Hayakawa nails the Colonel’s sadness perfectly, telling the heroine he believes his wife and children were wiped out in the nuking of Hiroshima. [In reality, all but one son survived, though the film omits to mention this] It’s incredibly  poignant, and makes this quote from Keith particularly apt: “The Japanese in Three Came Home are as war made them, not as God did, and the same is true of the rest of us.”