Another week, another Chinese animal attack movie on Youku’s YouTube channel. This one possesses only two speeds: dull and tedious, or batshit crazy. Unfortunately, the balance tilts a bit too much towards the former. Has its moments, but at less than 70 minutes in length, probably not quite enough of them. It’s mostly about a bland, uninteresting, mixed gender group of college students, who go to a remote island for a “research trip”. Quotes used, since I’m not sure we saw them engage in any actual academic activity at all. Faffing around in swimming costumes and engaging in unamusing banter? Yeah, there’s plenty of that. Fortunately, the island is also home to a reasonably sized crocodile, and a considerably larger snake. The latter has an underground nest containing a slew of eggs. Connoisseurs of the genre will know what that means, in terms of its final shot. 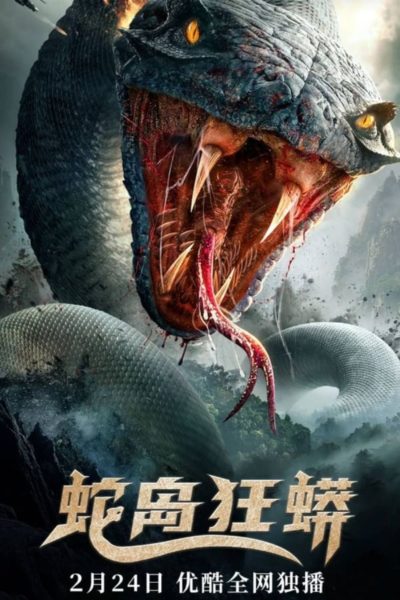 There are likely a dozen or more people on the island. I’d be hard pushed to tell you anything about the vast majority of them. The island guide Wang, a sullen but well-informed local, is probably the only one to make much impression. Though it is easy enough to figure out who is going to survive. Engage in anti-social behaviour such as littering – or, worse, breaking those eggs – and your card will rapidly be marked with a red X. Deliver an ecologically conscious speech about how humanity needs to protect nature, and you just might make it to the end credits.

Eventually, the reptiles begin to snack on the mammals, and things get considerably more entertaining for the viewer. The croc is the opener, capable of surprising speed when in pursuit of a warm-blooded meal. But just when it looks to be ready for a co-ed buffet, the python shows why it gets title billing. [While we’re on the topic, is it just me, or does Snake Island Python feel at least somewhat superfluous?] That’s when the movie truly kicks off. Considering we’re talking about something 50 feet long and weighing maybe eight tons, the python is remarkably good at sneaking up and swallowing its unaware victims in a single bite. Well, at least when it’s not roaring. Because that’s what snakes do, isn’t it. Cue a slew of angry emails from herpetologists, in 3…2…1…

The film is, largely, a thinly-connected series of familiar elements. For example, going for a pee in the woods is, as always, a fatal mistake. Yet, somehow, this predictability enhanced our enjoyment, maybe because it gave us a sense of superiority over the family pack of human Lunchables. On the other hand, it does feel lazily constructed, the kind of thing apparently thrown together in a few weeks, and is very much lacking in innovation. I’ll confess to being just about adequately amused. But I’ll also confess to being more excited to discover the director made another film entitled Rabid Giant Crocodile. Your move, Youku. Your move…