I think the use of the word “Dragged” in the title creates certain kinetic expectations, which the movie in not interested in fulfilling. It runs – or, more accurately, parks, since it feels half the film is shots of Gibson through a car windscreen – for 159 minutes, yet barely has material for half that length. However, Zahler seems entirely aware of this. He just doesn’t care. To what extent you are willing to go along with him in this wilful languidness, likely determines how much you will get out of this. It is laudable, in the sense of a film-maker willing to defy the tropes of the genre in which he operates, perhaps the cinematic equivalent of this GIF. Yet those tropes typically exist for good reason. 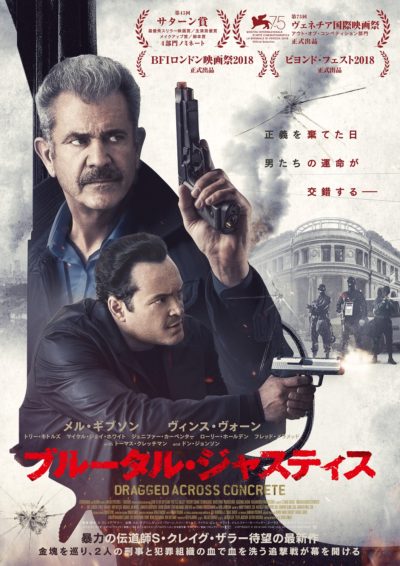 It’s the story of Detective Brett Ridgeman (Gibson), who has been stuck at the same rank for 30 years. Suspended after an arrest goes viral, and with a family in desperate need of a fresh start, he hatches a plan to rob the brutal gang of robbers led by Lorentz Vogelmann (Kretschmann), whom he learns are planning a heist. He brings in similarly disgruntled partner, Anthony Lurasetti (Vaughn), but naturally, things don’t go as expected. Vogelmann’s crew are even more vicious than they appear, eventually leading to an alliance of convenience with one of the gang. For ex-con Henry Johns (Kittles) has realized he is actually more of a loose end to Vogelmann, and won’t be allowed to pose any future problems.

There are no conventional “good guys” to be found here, just various shades of dark grey. Most obviously, Ridgeman is very much cut from the Dirty Harry cloth, someone to whom “criminals’ rights” is an oxymoron. This has caused some to describe the movie as “a vile, racist right-wing fantasy.” Hey, I wouldn’t call it that good, hohoho. But it is rather more complex, illustrating the concept that “bad” people can still do “good” things. Quotes used advisedly, given the subjective nature of both words here. It is refreshing to see a film whose central character is so clearly problematic to some. Having him played by Gibson, who has his own history of problematic behaviour, just adds an extra element of triggering.

That said: goddammit, this takes its sweet time to get to where it’s going, a pace not helped by that destination feeling almost inevitable from early on. So there’s scenes of Johns playing video games with his disabled little brother. An odd 10-minute chunk where the focus shifts entirely onto Jennifer Carpenter’s angst-ridden bank teller, before discarding her in brutal fashion. And so many sequences of Detectives Ridgeman and Lurasetti sitting in their car. To put it politely, this film really captures the tedium of the police stake-out. I hope you are ready to watch Vince Vaughn eating a sandwich. Zahler had a similar approach in Bone Tomahawk, with horse-riding replacing car-sitting. It worked better there, due to a sense of progress, stunning scenery and an extraordinarily gory payoff. Here, I’m less convinced the destination is worth the wait.