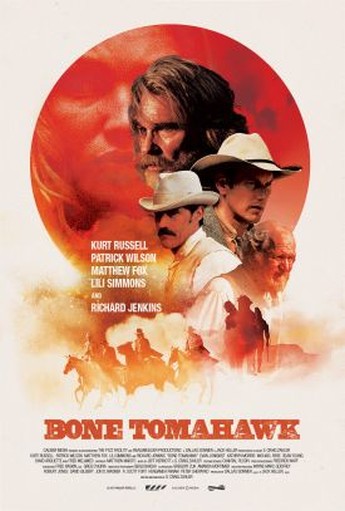 Certainly the most disturbing Western I’ve seen in a long time, perhaps ever, this kinda feels like a combo between the Coen Brothers and Eli Roth. The small Western town of Bright Hope suffers an assault from a tribe of renegade, cave-dwelling and cannibalistic Indians, that kidnap several townsfolk before vanishing back into the wilderness. In pursuit are local sheriff Franklin Hunt (Russell); his elderly “Back Up Deputy” (Jenkins); John Brooder (Fox); and Arthur O’Dwyer (Wilson), the husband of one kidnappee, who insists on coming along despite a pre-existing injured leg. The journey is rough, and they are forced to leave O’Dwyer behind after they lose their horses, and his leg’s condition deteriorates. but it’s absolutely nothing compared to what they find at the end of the journey, when they make it into the Indians’ territory, and discover exactly how savage they are.

You can certainly argue that the journey occupies too much of the movie, padding the running-time here to an unnecessary 132 minutes. However, it helps that the characters here genuine seem like actual characters, with quirks and foibles introduced during the prelude to the rescue mission. For a first-time director, Zahler has assembled an impressive cast, with a lot of faces you’ll recognize from elsewhere, running the gamut from Sid Haig to Sean Young. The greatest success, however, are its monster. It’s interesting to see a Western that depicts the locals as irredeemable savages, though the film is careful to provide a counterpoint, in the shape of a town resident who points out that even his fellow native Americans regard these troglodytes as utterly beyond the pale.

And for good reason. They’re creepy as hell, from the sounds they emit, right through to their brutal approach, which is defined early, but only reaches its zenith after the party are captured and… Holy fuck, did I really just see that? For this includes perhaps the most brutal fate ever depicted in a mainstream American film. While it’s that which will stick in our minds for an extremely long time, there is actually plenty here to enjoy, as it flutters between a bouquet of genres with credible dexterity. If the nods to masters such as John Ford are clearly apparent, this has as much in common with the works of Ruggero Deodato, and the unlikely combination is one that works far better than you might expect. Quentin Tarantino will need to up his game with The Hateful Eight, if he’s to match this re-invigoration of the Western.