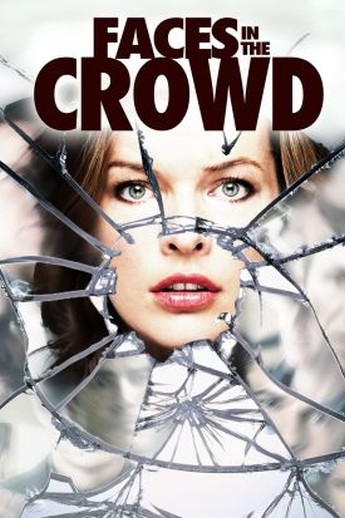 A disappointingly-bland psychological thriller, from the man who gave us the wonderful Bloody Mallory, this is just too contrived to be effective. Teacher Anna Marchant (Jovovich) witnesses an attack by feared serial killer, “Tearjerk Jack”, only to topple off a bridge and bang her head on the way down. When she regains consciousness a week later, she is now suffering from prosopagnosia. I will presume this is as new an ailment to you, as it is to me, and explain this is the inability to recognize faces, even your own – every time you see someone, it’s as if you are doing so for the first time. Convenient for a murder witness in a movie, huh? Naturally, this also causes issues with her boyfriend, Bryce (Shanks), who is distanced by her inability to recognize him, and Anna grows closer to investigating detective, Sam Kerrest (McMahon), who is trying to prise the crucial information she holds, out of her shattered mind.

I did like the way Magnat approached the heroine’s illness, using two or more different – yet similar – actors and actresses to play each role. It’s an effective and unsettling way to depict the uncertainty Anna must be feeling. Unfortunately, outside of that and Jovovich’s solid performance as a woman whose mind is falling apart, there is not much to recommend this, especially in regard to the plot, which stumbles from one dubious plot point to fortuitous coincidence. As a trivial example, the killer takes Anna’s phone, then uses it to call her – and we know this, because it comes up on her new display as “Anna’s phone”. Who would even do that? And, please don’t get me started about the final climax, which is telegraphed well-ahead of time, and so conveniently-plotted as to be cringeworthy. Marianne Faithful makes a decent impression as Dr. Exposition, delivering her lines with more weight than they deserve [her character name is actually H. Langenkamp, which has to be an Elm Street nod]. But having waited a decade for Magnat to follow up magnificent Mallory, this has to be a huge disappointment.