Maybe I’m getting old. Or maybe they’re getting old. Personally, I find the nearer I get to death, the less interested I am in meeting it, and have become considerably more risk-averse. Perhaps this is why I didn’t quite “get” the latest entry in the franchise as much as the original when it came out, twenty years ago. Oh, as then, I still laughed like a fucking drain on occasion, not least at the opening where a rather… unusually-shaped kaiju menaces a city. I continued to shake my head in a mix of sadness and awe at the immense amount of testicle violence. Some segments are basically a real-life version of the Ow My Balls segment from Idiocracy. 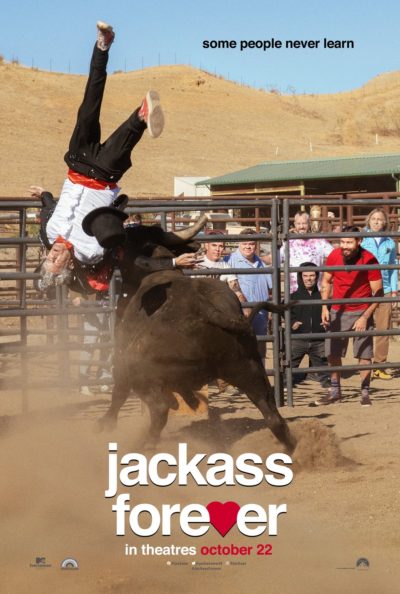 But there has been a gradual sense of diminishing returns over the course of the show, not least because you can only go so far – and they basically went as far as they can in the original movie. The makers acknowledge this to a certain extent, split-screening old and new footage. However, acknowledging a problem isn’t the same thing as fixing it. Attaching meat to a man’s crotch and bringing in a carnivorous entity was amusing the first time. Here, we get it, not once but twice more: with a vulture, then a bear. Similarly, switching out horse semen for pig semen isn’t really innovative, even if you dump five gallons of the latter on someone’s head. Now, that’s a sentence I did not expect to be writing this morning.

At its worst, it all feels a bit mean-spirited and repetitive. It also is somewhat ironic to see them fulsomely thanking their COVID protocol advisors in the credits. I suspect the mortality rate is probably higher from letting an angry bull attack you (right). Similarly, the inclusion of a female Jackass team member, Rachel Wolfson, feels like tokenism, not least because a couple of scorpion stings is about as far as she goes. [No, I wouldn’t go through that. But after you have watched someone let their crotch be jumped on with a pogo-stick, that raises the bar. Or lowers it] Though I did laugh when the scorpion fell onto Wolfson’s chest, and couldn’t be removed until she had given explicit consent. Which consisted of her yelling, “PERMISSION!”

The old version of the show wouldn’t care about such things, though despite being a kinder, gentler (or, at least, post #MeToo)  Jackass, there are still parts that work, often those which are cinematic non sequitirs e.g. a ten-second clip in which a man on a skateboard is brutally tackled by a giant fist costume. But a decade after the last installment, with one cast member (Ryan Dunn) dead, and another (Bam Margera) suing the production for “violating his civil rights,” it does feel like this is a relic from a previous era, trying too hard to recapture previous glories. Sometimes, you just have to accept that both you and the world are no longer what they used to be, and move on.