Some people probably think torture porn was invented by Eli Roth. But it’s been around the fringes of horror considerably longer. I’d say Herschell Gordon Lewis was likely the true father of the subgenre. Works like Blood Feast and 2000 Maniacs existed purely for the extended kills, after the victim has been terrorized. The unloved sibling has persisted ever since, and this eighties flick seems to fit right into the box. Perhaps surprisingly, this was originally released by Cannon, albeit only in a severely truncated format. The uncut print is the Italian dub, so there’s now a version floating around the usual sources, which splices the gore from it, back into the English print. So at those points, everyone suddenly starts speaking Italian, and the colour changes due to the different print quality. It likely says something that this doesn’t impact the movie. 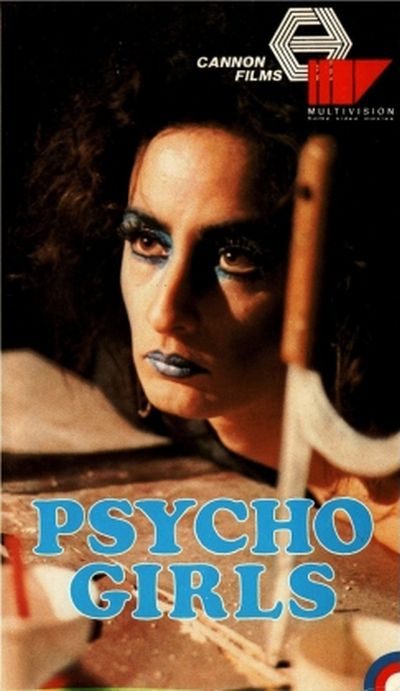 I also wish to complain about the title, since there is, in reality, only one psycho girl present. That being Sarah Tusk (Mignacco), who poisons her parents on their anniversary at the age of ten, and is consigned to the Lakeview Asylum for Mental Disease, under the not-so-loving care of her sister, Victoria. The appropriate number of years later, she escapes with a couple of fellow inmates, kills her bizarrely named therapist Dr. Hippocampus, and follows that up with Victoria. She then takes her sister’s place as chef for the Foster family, Richard (Cuff) and his wife (Graham), who just so happen to be having a dinner-party. One drugged course of “steak tartare” later, the guests wake up back in Lakeview, which oddly, is now completely abandoned: I am really not sure of the timeframes here. Anyway, they’re at the mercy of Sarah and her psycho colleagues.

Who aren’t girls at all. No, I’m not bitter. In the slightest.

After all, I can find plenty of other qualities for which this can be criticized, such as the casual approach to plotting. I get Sarah going after Dr. Hippocampus, and her sister, who has never forgiven Sarah for killing their parents. But quite what she has against Richard and his guests is never explained. A couple of them do appear to be psychiatrists, so perhaps she’s an equal opportunity killer on that front? There is, for no apparent reason, a lengthy dinner-party conversation on the shortcomings of that particular profession. So perhaps writer-director Ciccoritti (who has a cameo as a pizza-delivery guy) bears some kind of grudge against shrinks?

All shortcomings in story-line and unconvincing performances aside, we are here for the torture porn, and that is pretty disappointing as well, once you get past Dr. Hippocampus’s severed head getting its nose sliced off. There’s a sequence, all but missing in the English language print, of a naked woman being electrocuted in a bathtub. A man is cut up with a straight razor, and a woman gets her toenails pulled out. Then Richard escapes, and may or may not take revenge on his captors. To be honest, I’d gone past the point of giving a damn, and even the “twist” at the end merited not much more than a relieved sigh.