This took a bit of research since it has been uploaded by its Chinese distributor to YouTube with the title “Super-powered female agent travels to reveal the mystery of the falling dragon.” Okay, while you have my attention, I’m guessing that’s not its IMDb name. And with the credits and YouTube description entirely in Chinese, I despaired of ever finding its real title. However, a single English line – “A film by Zhang Tao” – eventually proved the Rosetta Stone. So, here we are, writing about a sprightly yet horribly derivative flick, which is part Men in Black and part Doctor Who, with a side-dish of Blade II for good measure. Plus dragons, because China. 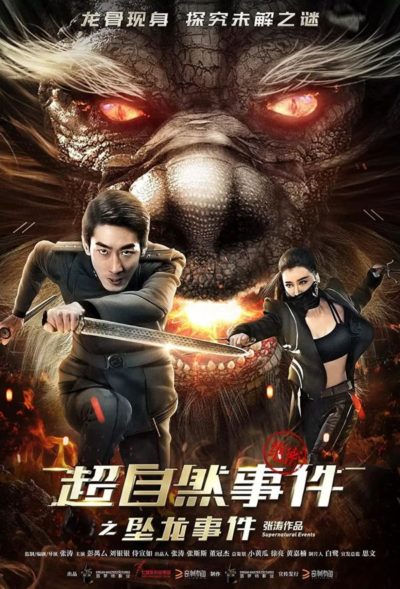 It begins with cop Mu-Shui Jin (Peng) involved in a hostage situation, where the perpetrator’s face suddenly splits open (I mentioned Blade II) before scurrying away. This leads to an invite to join Bureau 709 (I mentioned Men in Black), a Chinese bureau dealing with all kinds of paranormal threats, from extraterrestrials to mermaids. They have a time machine, allowing them to go to any point in space and history (I mentioned Doctor Who). He’s teamed with veteran agent Ling Dong (Liu), and sent back to 1934 to investigate the reported case of a dragon coming to Earth, because in the modern era, tortured dragon sounds have been heard coming from space. However, as well as avoiding butterfly effects and grandfather paradoxes, as well as the occupying Japanese army, they’re not the only time-travellers with an interest in the dragon.

For it turns out the creatures contain superheavy elements from their extraterrestrial environment, which can be used to create weapons that make atom bombs look like firecrackers (well, at least that’s an original idea). So the future Japanese empire have also sent their representatives back – one of whom may or may not have a connection to Ling Dong – to harvest the animal and its resources. As you can see from the picture at the top, these are full-on Chinese dragons: there’s a small child at the front for scale, in the absence of a banana. However, the film has zero interest in providing closure on any of its threads. Who killed Dong’s parents? What was the face-splitting monster at the beginning? Don’t get your hopes up about finding out any answers.

The movie instead ends on a total cliffhanger, with Bureau 709 under attack by unknown forces. To that extent, it feels more like a pilot episode for a TV series than a real film. While I’d not mind seeing such a show, what it provides here is unsatisfactory. It’s a shame, as there’s clearly enormous scope in the idea, with the entirety of the space-time continuum available for stories. Jin and Dong do have decent chemistry, and if the effects are no great shakes – the dragon looks particularly unrealistic – the rest of the production looks good enough to pass muster. Had they bothered to give us an actual, fully-baked story, this might have been a minor cult favourite, instead of a case of unfulfilled potential.