Anyone for fish ‘n’ chips? That’s my sole takeaway (hohoho) from this low-budget effort, whose ambition is utterly unmatched by what it can deliver.  It begins in an almost promising fashion, with two fishermen catching a mermaid (Bokova), and cutting of her tail. Conveniently passing shrink on a boat, Dr. Beyer (Culver), swims over and rescues her, but it quickly transpires, he has his own malevolent agenda. After she has grown legs, albeit useless ones, the mute creature is confined to his ‘psychiatric facility’. Quotes used, because it’s the least convincing, most badly run and poorest lit such establishment in movie history. I could throw some blankets and cushions around my living room and it would be a more credible asylum. 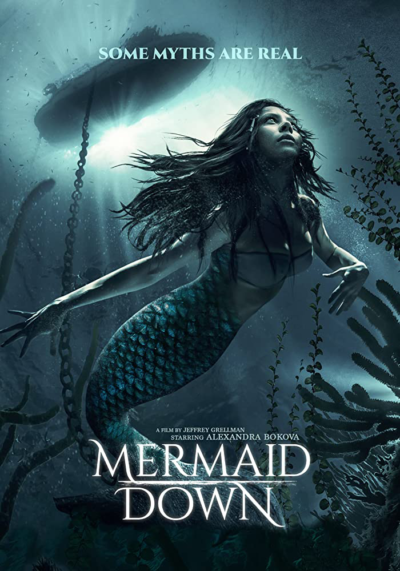 The all-female residents eventually figure out the new inmate’s issue, in part because her kind has learned sign language from pirates or something. The facility is also haunted by a ghost (Kaiser), who doesn’t know she is dead, despite being visible only to the mermaid and one other person (Dunaway). Dr. Beyer feeds patients to his Rottweiler in the basement, when not running the wheelchair-bound mermaid over, or machine-gunning residents in the shower. The last does eventually bring the attention of the authorities, so he hightails it (hohoho!) with the mermaid, and the other inmates in pursuit, leading to a final confrontation on the high seas. By that point, however, I was contemplating whether to test my mermaid skills, by climbing into a weighted burlap bag and flinging myself into our swimming pool.

A couple of elements are not quite as woefully inadequate as the rest. When you can see what’s going on – admittedly, not often – it looks decent. While it’s obvious they largely avoid shooting the mermaid below the hips, the effects are okay. The score also occasionally brushes up against effective. But the rest? Hoo-boy. The script was co-written by Grellman and Kelly Lauren Baker, who is apparently a clinical psychologist, and is a complete mess. It tries to do far too much, first off. In what world do you think, “I’m going to make a movie about a mermaid. But let’s throw a ghost in there. And a serial killer too”? The lack of motivation for anyone here is also painfully apparent.

I’m sure there’s some kind of point about female empowerment being made. Fortunately, it’s so muddled that any such message is completely incomprehensible. I say fortunately, because going by the way literally every man here is a psychopath, while the women are all supportive, I’ve a feeling I wouldn’t like it much. Bokova’s is the only performance that stands up to inspection, and that’s mostly due to her not needing to deliver any of the execrable dialogue, just the occasional squeak. The longer the rest of this goes on, the worse the odour of stale fish wafting out of the script becomes. This is truly the petrol station sushi of mermaid movies, and should be given a similarly wide berth.