Finally, Verhoeven gets to combine his two greatest passions: religion and lesbians. I’m only somewhat joking here. The director covered the topic of faith almost forty years ago in The Fourth Man, and has quietly been a religious scholar for a long time, publishing a book about Jesus in 2010. He has also been looking to get a biopic of Christ off the ground for decades. Indeed, that was one of the projects he put forward after Elle, but the producers went for this. I’m sure Verhoeven was fine with their choice. I certainly imagine him hearing about a book called “Immodest Acts: The Life of a Lesbian Nun in Renaissance Italy”, and reaching straight for the phone. 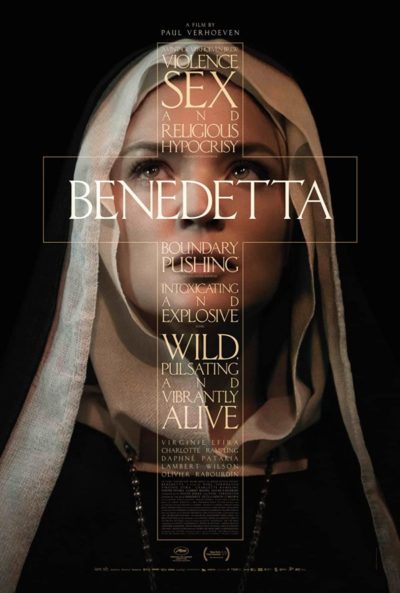 The resulting film adaptation is hardly less salacious than that title. It’s the story of Benedetta Carlini (Efira), a nun in 17th century Italy, who had visions of Jesus, and developed stigmata, scars matching the wounds supposedly received by Christ on the cross. Initially, this is cause for celebration and Benedetta is elevated to the position of Abbess, replacing the previous incumbent, Felicita (Rampling). However, she is also falling into a sexual relationship with another nun at the convent, Bartolomea (Patakia), and when it becomes politically expedient to do so, the authority of the church, in the particular shape of Papal representative the Nuncio (Wilson), descends on the pair with full force.

As you’d expect, there’s no shortage of flesh on view. Indeed, in terms of pure screen time, it feels like there’s more nudity here than in an nun-sploitation tale like Behind Convent Walls. Though since this has a 132-minute running time, it’s  spread out – much like Benedetta and Bartolomea, hohoho. Definitely a couple of scenes you’ll be shuffling uncomfortably if you had the misfortune to watch with your parents through, particularly if they’re religiously inclined. Probably the most blasphemous sequence has them carving a small wooden icon of the Virgin Mary into a dildo. That’ll get you a strongly-worded email of complaint from the local diocese, to be sure. It’s also kinda gory, mostly due to Benedetta’s visions depicting a fightin’ Jesus, who wields a sword with enthusiasm.

Dramatically, though, it’s a bit predictable and almost bland, or at least safe: there’s not the same sense of challenge as in the director’s best works. It touches the usual nexus between politics and religion, and the thin line between sainthood and mental illness, but going after the Catholic Church feels like low-hanging fruit. I did like how Verhoeven never concludes whether Benedetta’s stigmata are genuine, or self-inflicted for her own benefit. But the most interesting character is likely on the fringe: Abbess Felicita is savvy enough to negotiate the shoals of both religious and secular worlds, yet also knowing when she has to step aside. If Verhoeven does get to make his life of Christ, I hope it manages to do more with the topic. Still: hot lesbian nun action. So there’s that.