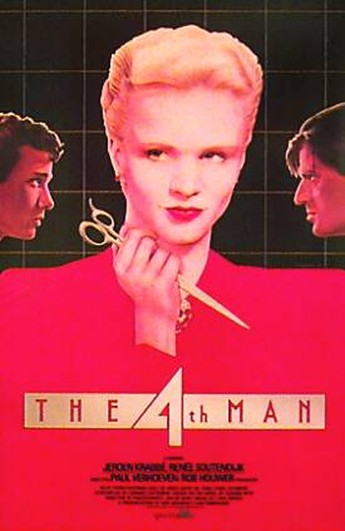 Verhoeven’s last film before heading off to Hollywood – though the screenwriter here, Gerard Soeteman, would also pen Flesh & Blood. It’s a gloriously-twisted tale of religion, sex and ironic, violent death – it other words, most of the director’s usual themes – adding in premonitions, and the importance of listening to them. The “hero” is also typically non-heroic: Gerard Reve (Krabbe) is an alcoholic, a compulsive liar and completely sleazy bisexual. His novels take him to the seaside town of Vlissingen to give a lecture; even before getting there, he’s having visions of bleeding eyeballs, and on his arrival, he sees what appears to be a coffin with his name on it.

He ploughs on, and after his talks, is seduced by local beauty stylist Christine (Soutendijk). Gerard hangs around, after becoming obsessed with her boyfriend (Hoffman), only to discover the men in Christine’s previous life have a nasty habit of suffering “accidental” deaths. He continues to have cryptic encounters and dreams, suggesting ominous events are about to unfold. Is he simply paranoid and delusional, or should he take heed of the warnings?

There are a lot of parallels with Basic Instinct here, and Verhoeven has said he regards this as a prequel of sorts. Both movies feature a woman who may or may not be a psychotic killer, and a man of fragile sanity who falls for her, though the bisexual writer here is the latter rather than the former. However, this film prefers to remain ambiguous as to Christine’s guilt: that’s she’s completely manipulative is not in question (making her a perfect partner for Gerard), yet is she also a murderess? There’s an awful lot to enjoy here: the performances from the two leads are excellent, and the visions have a hyper-realistic feel to them that’s perfectly realized.

The entire film could well be in the fevered mind of Reve – it may not be coincidental that “rêve” means “dream” in French, though it is also the name of the author on whose book this is based. Mind you, Verhoeven said on the DVD commentary, “The critics thought it was a very deep movie. I always thought it was more a joke.” Whoever knew that the Dutch had such a delightful sense of humour?

What we said then [4] This predates, is completely different to, and is even better than his other works, Robocop and Flesh & Blood, which is saying a lot since they were by no means bad. A bisexual writer (Krabbe), obsessed with death, shacks up with a beautician (Soutendijk) so he can seduce her boyfriend. He has visions and premonitions of death before he discovers she has already buried three husbands. Will it be him or her boyfriend who gets to play the title role?

Disturbing use of religious imagery, ‘real’ hallucinations and brilliant camerawork combine with believable, frightening performances (especially from Soutendijk as the Black Widow) to make this one a real find, though not one the whole family can enjoy, shall we say! Whether it has the required staying power to last repeat viewings is unknown – until then, let’s make it the first film to get… 10/10