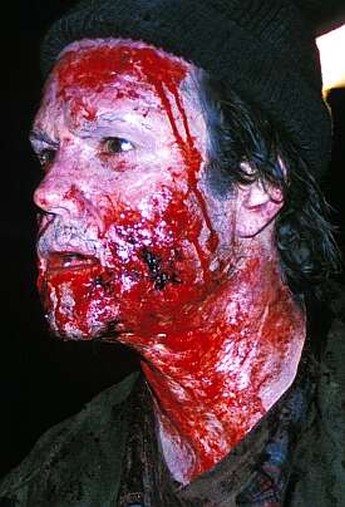 Rural nightmare movies tend to come in two forms: the threat is either the residents, or nature. This film has elements of both, and will likely inspire a firm interest in spending your next vacation in an urban landscape. Mind you, for the first half an hour, when you find yourself muttering, “Die! Die!” at the irritating, cookie-cutter teen characters, sympathies are likely to be with the countryfolk. A bunch of students head out to a cabin for a week of drinking, drugs and unprotected sex, until they meet a local with a nasty skin disease, whom they greet with baseball bats, bullets and by setting him on fire. He gets the last laugh, however, contaminating their drinking water with his decomposing corpse. When the kids also start going to pieces – literally – they attempt to get help, but find the inhabitants less than friendly.

Peter Jackson supposedly said “Horror fans have been waiting years for a movie like Cabin Fever” – seems he’s been at the pipeweed, given this mish-mash of elements from (mostly superior) other films. Competently directed, there’s certainly no shortage of skin-crawling moments, KNB doing their usual sterling effects work, but these are hardly characters you care about. With clunky plot contrivances such as people conveniently leaving their car keys in the ignition – more than once – it’s hard to see why this escaped the straight-to-video fate which the script certainly deserves.