See! The human body as never before!
See! Donald Pleasance having a panic attack!
See! Raquel Welch getting antibodies scraped off her breasts! 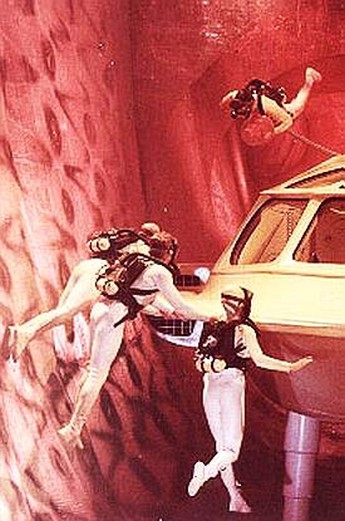 Ever yearn for an innocent age when cinema audiences were awed by the simplest effect? Here you go, then: Welch, Pleasance and their colleagues are reduced to minute size (ooooh…) and injected into a defecting scientist (aaaah…) in order to destroy a brain clot. Cool… especially when the inside of your body looks like a lava lamp designed by Timothy Leary, and inhabited by cushion stuffing and seaweed. Naturally, there’s a saboteur on board, and the plot grinds to a halt so people can spout 60’s philosophical ruminations at each other. Save for the first five minutes, this takes place entirely inside the secret base of the Combined Minature Defence Force (where golf carts are the preferred method of transport), so manages simultaneously to be both terribly dated, and timeless.

It takes 40 fairly-dull minutes to get inside the body but things liven up considerably when they do: it’s like a TV special, When Good Corpuscles…Go Bad. Did I mention they only have (a curiously-precise) 60 minutes before the miniaturisation wears off? For a modern viewer, it’s extremely naive, yet therein lies its charm, with everyone being Very Serious about even the most ludicrous elements – the ending comes to mind there. Still, you can see its influence in many modern SF pictures which put effects before plot, and to much less engrossing effect.