This is available through Youku, the same channel which brought us most of those Chinese animal attack movies – though matters were confused by them randomly changing its title to the alternate one above. This is an adequate if run-of-the-mill action film, which doesn’t do anything particularly well, yet doesn’t do anything particularly badly, either. The main characters are four thieves, who work under the instructions of their leader, Ma Bang (Ruan), in what feels like 1930’s China. Their current target is Jin San-Sheng (Tsui), a corrupt businessman who has stolen wealth from many in the Tong Cheng province. As if that weren’t enough, Ma has a personal grudge, Jin having left him an orphan when he was young. 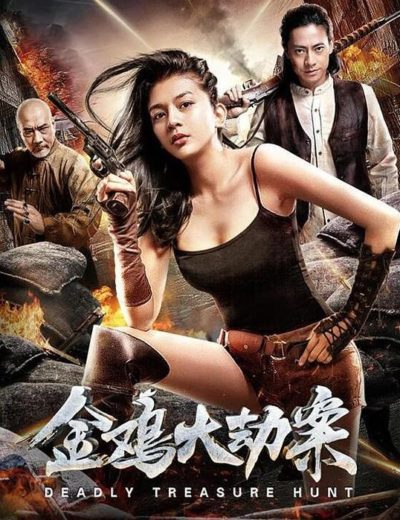 It begins as a “Robin Hood” style affair, with the group using their skills to return Jin’s ill-gotten gains to the people. Naturally, the four all have their talents, though that’s about as far as characterization goes. So there’s Meng Duo (Wang), the strong guy; Liu Ru-Shi (Tan), the mistress of disguise; Ai Di-Sheng, the smart one; and Yan Ou-Yan, who… Well, to be honest, she doesn’t add much to the mix at all, and seems only there for the purpose of a single scene at the end. As a result, it doesn’t have the impact it should. However, as the film progresses, it becomes more about Ma’s vendetta, assisted by Jin’s daughter, who doesn’t appear to like her father very much.

For the main focus in the second half is on an ancient artifact owned by Jin, the base of which conceals a map showing the location of long-lost treasure. Unfortunately for Western viewers, this takes the form of a rooster statue, which leads to sniggering schoolboy hilarity at subtitles such as, “Who wants to buy my golden cock this time?” In the process, Ma gets captured, smuggles a message out with the help of his nemesis’s daughter, and is rescued with, frankly, remarkable ease before the final showdown in the city streets. There’s no shortage of carnage here, living up to the film’s title – though most of it involves faceless minions. Cinematographer Gao Bo-Wen does occasionally add some nice flourishes, such as the flashbacks to Ma’s youth being in black-and-white, except when blood is spilled.

The action is a similarly mixed bag. Most of the time, it’s nothing to write home about, but on a couple of occasions, there are moments that rise above the low-key mediocrity – or competence, if you’re feeling charitable – which is this film’s calling-card. Naturally, the film ends in an open manner, with a sequel likely involving a hunt for that lost treasure. Though since things finish with a series of untranslated captions, apparently detailing the characters’ subsequent fates, I could not honestly swear to that. What is perhaps telling is how the incomprehensible coda provoked not much more reaction from me than a slight shrug, as I went to do the washing-up. While I don’t feel like my time was wasted with this, the impact it had was almost negligible.