This severely disappointing effort must be close to the worst Adkins film I’ve seen. It is certainly the worst by Florentine, who’s usually reliable enough in the straight to video action field. Part of the issue is having your story set around the border between New Mexico and Mexico, then filming in Bulgaria. That’s just… No. It won’t work, regardless of how many Mexican flags you throw up, or blaring trumpets get dumped onto the soundtrack. The cast is also almost entirely American free too. Firstly, there’s Van Damme, a Belgian playing his usual “Cajun”, this time Border Patrol officer Jack Robideaux, reassigned from Louisiana to the New Mexico border. Virtually everyone else in the major roles is British. For instance, the actress playing his boss, “Capt. Ramona Garcia” (Robb), was born in the famous Hispanic city of Glasgow. 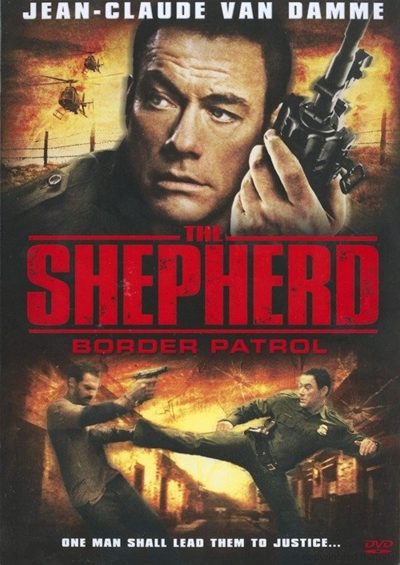 The same goes on the side of the villains, supposedly American ex-special forces, who have gone rogue, moved to Mexico and displaced the local cartels. Yeah. About that insane story-line. They’re led by Benjamin Meyers (Lord, a Manc) and his lieutenant, Karp (Adkins, a Brunmie). Oh, everyone is trying to sound like Yanks. Let’s call the success on that front “mixed”, and move on, shall we? But you could be the real thing and still be hamstrung by lines like, “Don’t confuse these tits with weakness!” Robideaux ports a pet rabbit around with him, because reasons [It is eventually explained. You may wish they hadn’t bothered], and is soon incurring the wrath of the local townsfolk, Garcia and eventually, Meyers.

The bad guys are the kind of people who hijack a bus filled with priests and nuns to use as human shields, and outfit it like Mad Max was a documentary, with Meyers personally using it to crash across border, not once but twice. What, exactly, is the purpose, and wouldn’t there be less flamboyant ways to achieve the same goals? The story is similarly muddied elsewhere, from the title, and a prologue set in Afghanistan, through the quickly abandoned use of unwilling suicide bombers, to Robideaux’s rather pointless motivation. I mean, Meyers being a psychotic drug-lord isn’t enough? Though I guess they needed to explain the rabbit somehow.

All of which would be tolerable, if the action reached a compensatory level of kickass-ness. But it really doesn’t. Even the Popemobile From Hell isn’t as fab as it could have been, although I did appreciate the physical nature of its use. The highlight is, to nobody’s surprise, Adkins facing off against JCVD. However, that only goes part way towards making up for the sad waste of the former’s talents over the previous hour-plus. To be honest, there were points here where I was struggling to stay awake. While part of that was a short sleep the previous night, it’s still a fairly savage indictment of any movie in this genre, if it’s incapable of staving off unconsciousness in the viewer.