This is a bit of a chonker, coming in at 141 minutes. Though considering it’s an adaptation of a manga series which ran for more than nineteen years, I guess the film can be considered relatively terse. The movie tells the story of rogue samurai Manji (Kimura). After being killed in defense of his little sister (Sugisaki), he’s revived by a mysterious hooded figure, and given the dubious gift of immortality, powered by “bloodworms”. Fifty years later, he’s recruited as the bodyguard of Rin Asano (also Sugisaki), who is the spitting image of Manji’s late sibling. Rin wants revenge on the Ittō-ryū, the group who killed her parents, under the leadership of Kagehisa Anotsu (Fukushi). Manji reluctantly agrees to help: much betrayal and limb-lopping follows. 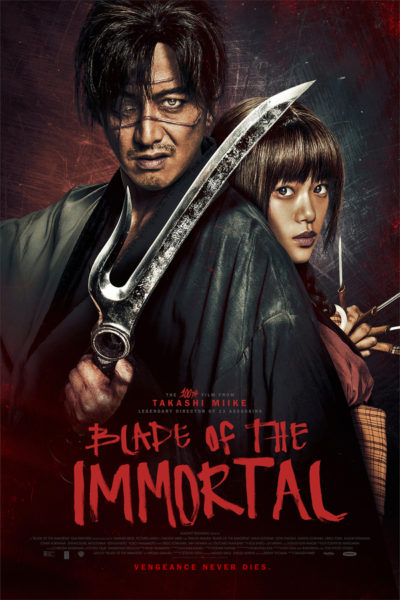 This was Miike’s hundredth feature, though there is not particularly much here to mark it as his. Indeed, there’s not much to distinguish it from any other “lone samurai goes on a mission of vengeance” movie, you may happen to have seen previously. Kimura has a certain rugged charisma, but is largely painted into a corner by the script. Once you’ve established your hero can’t die, where’s the threat? Yet, weirdly, the film contradicts itself here early on, bringing on another immortal, wielding a blade coated in Tibetan poison which can block the bloodworms regenerative ability, and lead to death. I expected this kryptonite to show up again later. It never does.

Nor do we get any explanation for the mysterious hooded figure. What is her agenda? Why is she roaming the Japanese rural landscape, lobbing eternal life at random samurai? Maybe this gets explained somewhere in the thirty volumes of the manga? If so, this is an issue, since I’m a firm believer that any adaptation needs to work on its own merits. The main body feels like a Japanese swordplay remake of True Grit, with a feisty young girl hiring a grizzled veteran for revenge purposes. Though added complications are present here, such as in the Ittō-ryū’s attempts to build a relationship with the official government. These feel more like diversions, and aren’t much more than detours on the road to the massive fight we all know is coming.

This aspect is, at least, well-handled and the battles which bookend this are as good as you’ll see. Few are better at artistic arterial spray than Miike. The one-on-one conflicts in the middle, however, have a tendency to take place at night or in other dimly-lit surroundings, which definitely lessens their impact. It’s not exactly new territory for the director either, and I’d say his 13 Assassins covered similar samurai shenanigans to better effect. There is likely a crisp, 80-minute movie buried in here, and when that’s allowed to appear, this will certainly hold your attention. The additional hour slapped on top of it? Not so much, and if you get through the whole thing without flagging, you’re a more dedicated viewer than I managed to be.