Full disclosure: this had to be watched in two installments. That, in itself, isn’t necessarily a bad thing. But the reason for the pause is because Chris and I both fell asleep. That is a bad thing. If I may misquote Oscar Wilde: “To lose one viewer, Mr Worthing, may be regarded as a misfortune; to lose both looks like carelessness.” On discussion, there were a few reasons for Hypnos sliding into our DMs, from the prosaic to the ridiculous. Especially early on, the audio mix was terrible, with dialogue often inaudible. The plot also jumped around in time, the relevance of which was not immediately clear, at best. And the heroine’s uneven, microbladed eyebrows proved the biggest distraction since Danielle Harris’s in Hatchet II. 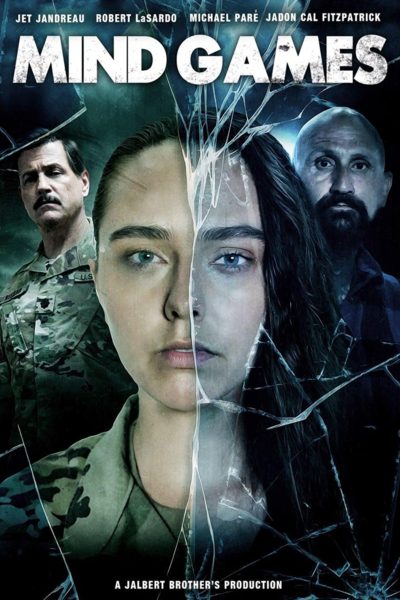 The story concerns Tara Mays (Jandreau), who is abducted from her literal doorstep, by Bruce (LaSardo), a man posing as a delivery driver. She wakes to find herself chained up, in a mobile home parked in the middle of nowhere. However, Tara has an apparent advantage over your typical kidnap victim, having been an Army psychiatrist, experienced in counselling mentally damaged veterans. Can she turn these skills on her abductor, and manipulate him to her advantage? Meanwhile, her commanding officer (Paré) and fiancé (Cal) are looking for the disappeared young woman. More or less… When Tara finds a CB radio tucked away in a corner of the caravan, this might offer a lifeline. Except, she doesn’t know where she is.

If this had remained focused on the mental fencing between Tara and Bruce, this could have been a nicely claustrophobic little thriller. She appears to herself in her military persona, offering advice and support. This is at least an interesting device, though the contrast in these two personalities is hard to consolidate. However, any time this began to generate any momentum, it gets derailed with another lengthy flashback to an interview with a more or less deranged soldier. These feel so totally different in style and approach, they seem spliced in from another film. Even after the end (with a twist that provoked little more than a raised, non-microbladed eyebrow), it’s never quite clear what their aim was, beyond padding the running time out, to well past what the narrative can sustain.

Some of the performances – at least, the central ones – are reasonable enough. Jandreau manages to hold your attention, although the script doesn’t portray her with enough consistency, and LaSardo has a decent amount of menace. “All in good time,” he says in response to Tara’s inquiry as to why he kidnapped her. Cal, however, has a blandness befitting his similarity to a young Casper Van Dien, and Paré, seems present purely for whatever name recognition value he can bring. [While he’s certainly a reliable veteran, are there really a significant number of people who will watch this because he’s in it?] I’d like to say I felt any sense of loss, but let’s be honest: sleep was a better option.