The early nineties were an explosion of creativity in Hong Kong cinema, particularly in the action genre. But this film is Exhibit A for the hypothesis that there were just as much dreck being produced, which nobody bothered exporting out of the British colony. In much the same way nostalgia sees things through rose-tinted glasses, the passage of time dimming the negatives, so does geographical distance act as a filter. It seems likely that for every Hard Boiled, Supercop or Naked Killer (all also made in 1992), there are quite a few Big Circle Blues. This is the kind of film Rick Baker and his crew would have dumped on gullible punters at the Scala for twenty quid a bootleg copy, probably calling it “Hard-hitting Cat III action!!!” Hey, I’d likely have ponied up. It’s got Michiko Nishiwaki in it! 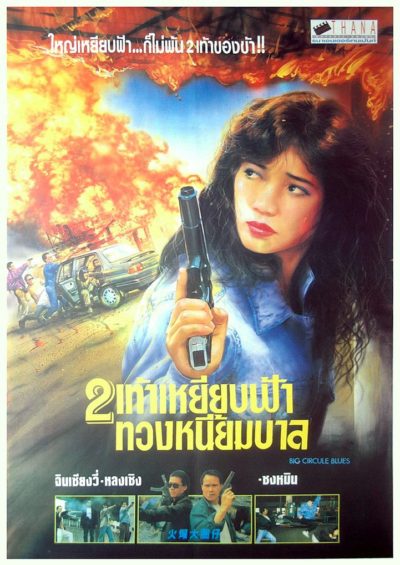 That creativity I mentioned, is almost entirely notable by its absence here. Though part of the problem is, the film can’t decide whether to focus on the cops or the robbers. It begins looking like the former, with Taiwanese coo Wai (Cheng) forced to team up with Hong Kong officer Show-Yun (Nishiwaki). I’d actually have been fine with that. It may not be a new vein, but executed correctly, can still be a solid source of entertainment, and we know how Nishiwaki can kick arse given the chance. However, that I’m reviewing it here, rather than on GirlsWithGuns.org, tells you how little she has to do. An honest label would state, “May contain traces of Michiko-flavoured action.”

Instead, the film probably spends more time on the robbers, and in particular the angst-flavoured life of gang member Luck. Any hope for him driving the plot foundered when his girlfriend is “hit” by a car. Quotes used advisedly, since this has to be the least fatal accident in cinema history, consisting of the victim rolling delicately across the bonnet, before coughing up blood on the windscreen (top). Naturally, she was pregnant, though I doubt my derisive snort at this news, was quite the intended result. The subsequent maudlin musical montage, containing such bizarre lyrics (per the subs, anyway) as, “Love is deep yet knot couldn’t help. Falls and ups”  was likely the final nail in the coffin of any hope for this as a piece of cinema.

About the only element of genuine note is the presence of someone who looks like Mr. Vampire himself, Lam Ching-Ying (but isn’t – it’s apparently Kam Seung-yuk), in a rather unpleasant, and a bit rapey, supporting role as one of the gang. Otherwise, there’s nothing in the plot to sustain the viewer’s interest, with the two halves never meshing to more than the slightest degree. Eventually, of course, Show-Yun and Wai eventually catch up with the gang, and there is the only half-decent action sequence that has to offer. And I need to stress the word “half-decent” there, for it’s no great shakes at all. I’ll be demanding my twenty quid back from Rick for this one.