This is Film Blitz’s first collaborative review, albeit entirely accidentally. Both Phil and Jim separately and independently watched and reviewed the film, without knowing the other was doing so. What follows is a combination of the two pieces: since they were originally their own beast, apologies if any of this ends up a bit clunky…

Jim: It seems like Reynolds has become the new incarnation of Adam Sandler. By which I mean, it seems hardly a day goes by without another movie in which he stars, showing up on Netflix. First, we had 6 Underground, and it feels like Red Notice was only last month.  Now there’s this, reuniting Reynolds and Levy, who worked together on Free Guy, which came out… last Tuesday or thereabouts? But that wasn’t on Netflix, so I guess nobody saw it. Hence the decision to get together on a lunch-break and toss off a generic time-travel SF/action flick. I presume the elevator pitch was “Two snarky Ryan Reynolds-like characters for the price of one”, and Netflix were all, “You had us at two snarky Ryan Reynolds-like characters. Here’s a cheque.”

Phil: This is generic derivative Netflix dross of the most mindlessly vanilla kind, and I doubt that you’ll remember any single part of it ten minutes after you’ve ordered the post-orgasm pizza. Now, is it Gosling or Reynolds?  The sassy, smart, à la mode, vaguely ‘fourth wall breaking’ kinetic lead.  They’re both a Ryan, but….. I really struggle telling them apart… and in a line-up, well… Erm.  Anyway, it’s one of them, and the plot…. well, the excuse for the film… is time-travel, and yaddah blah flippity blubbing flip flop flah bing bong sci-babbloks with world ending complications…. or… erm…. maybe just an irritatingly chronic cases of athlete’s foot…. or erm… some effect on stock exchanges…. or…

Erm, anyway. I’m not really sure what’s going on, as the dialogue writer has given the repartee and repertoire of a generic ‘Ryan’ to, gawd, most of the cast, and it’s at best confusing. “My god, you watch too many movies.” Yeah.  True-dat!  And? Verbatim from my notes:  “Uneven.  Weirdly so.” 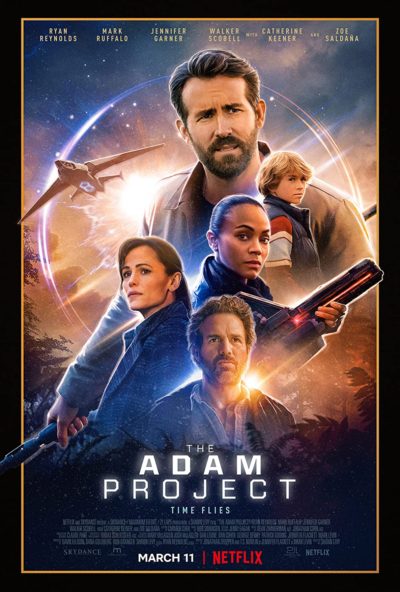 Jim: Let me be Mr. Exposition. Reynolds plays Adam Reed, who flies a craft back in time from 2050, and needs the help of his 12-year-old, bullied self (Scobell) to fix the craft and stop time travel from being invented by their father, because it’s going to be abused by evil industrialist Maya Sorian (Keener), who killed future Adam’s wife (Saldana), except she’s not really dead, just stuck back in time, waiting for Adam to come find her, and holy run-on sentence, Batman.

But there is literally not a single surprise, unexpected twist or novel thought in its pretty little head. It’s a cross between Back to the Future and The Terminator, filtered through the maw of the ever-hungry beast which is the Netflix algorithm. Cute kid? Check. Multi-racial romance? Check. Single-parent family? Check. Ryan Reynolds? Check.

Phil: It bumbles along unevenly and oddly, disquietingly, uncomfortably until Zoe arrives. Phew. Accompanied with some actual acting. Crikey! And yes, she makes the others up their game – which isn’t difficult – and her impact is immediate, palpable, and very welcome!  (Oh, by the way, she can really act!) What is ‘even more good’ is that Zoe has also brought a cinematographer with her. Not that they were bad, but the visuals improve noticeably as generic shouty bang zoomy bang crashy bang bangy eXcItEmEnT arrives, and let’s all be excited as <implausibly farcical silly nonsense> happens. Wooh!!!

Did I say ‘bang’?  Yeah?  Okay.  Add in, crash, boom, smash, and ohmegawd it’s only the flipping Hulk. And with Ruffalo’s arrival the brainlessly sassyly stupid uninspirational formulaic claptrap continues to bimble unevenly along.  To be honest an AI could have written it: my notes record “Written by committee. (and it was!)” Then the Avengers CGI team decide to join in.  Thankfully.  And, well, yeah, stuff happens… erm… …blam, kerblam, bash, crash and slam!  And.  Kabooooooooooooooom!!!!!!!!!!!!!!!!!!!!!!!

Jim: However, providing you are not looking for anything new… Or interesting. Or memorable. This is fine. The production values are sharp, and the script plays nicely into Reynolds’s snarky strengths, giving him lines like such as telling his younger self, “If I’m being perfectly honest with myself, you have a very punchable face.” He’s not wrong. Young Adam is a bit of a dick, especially to his mother. That’s Jennifer Garner, delivering an utterly forgettable performance, though still better than Mark Ruffalo as Dad. Naturally, young Adam learns a set of valuable life lessons, mostly not being a dick to his mother, through bonding with his future self and being exposed to life-threatening peril. 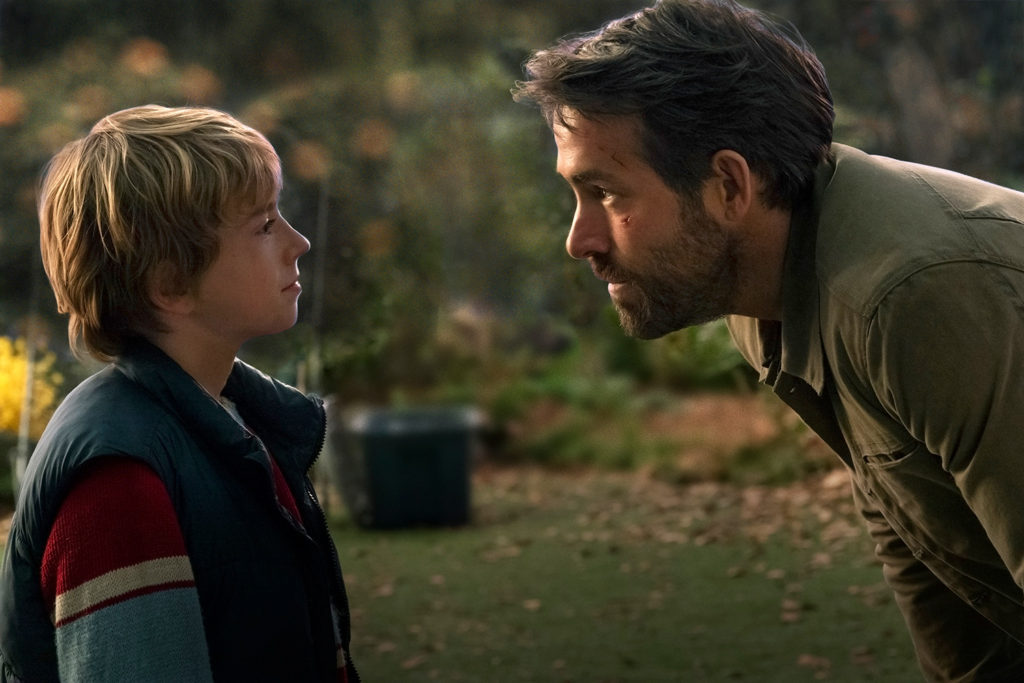 Garner and Ruffalo aren’t alone. Indeed, it feels like Reynolds is the only actor here committing to his role. Everyone else seems content to deliver their lines, probably against a green-screen backdrop of some kind, and cash the Netflix cheques, safe in the knowledge that this will quickly fall off the front page of the site into cultural oblivion. Probably to be replaced by another Ryan Reynolds movie, perhaps involving him bonding with a CGI animal of some kind. Admittedly, all the above criticism is likely harsher than this deserves. There are considerably more annoying Netflix originals, which deserve your energetic vitriol to a greater degree. This has no agenda other than being lightly entertaining. If hardly a lofty goal, I guess it serves that purpose adequately.

Phil: So, overall? Well, it’s utterly dreadful, formulaic, somehow boring and instantly forgettable drivel. But it is also a very likeable and fun film.  Yes, it’s brainlessly silly, just with endearingly touching, seemingly genuine and palpable on-screen warmth and chemistry (actually a lot of this). It is wonderfully forgettably rubbish, and all of which makes it genuinely worth your time. Well, if you having nothing pressing to do and just fancy putting reality on ‘hold’ for 100 minutes. I’d actually wanted to give this a ‘B’ but Jim threatened to fire me (again) and, at the end of the day, it is nonetheless puerile drivel.  So C+ it is.  But.  It’s a very good and very solid C+.