One in a series of “films Chris was stunned to discover I hadn’t ever watched” – see also Home Alone – this is a high-concept and big budget time-travel effort, which is every bit as slick as you’d expect. Marty McFly (Fox) ends up going back in time 30 years, courtesy of a time-machine invented by his friend, Doc Brown (Lloyd). There, he interrupts the getting together of his then-teenage mom (Thompson) and dad (Glover), and has to make sure that happens, or risk erasing himself from history. But wouldn’t that then mean he couldn’t have gone back to interrupt them? 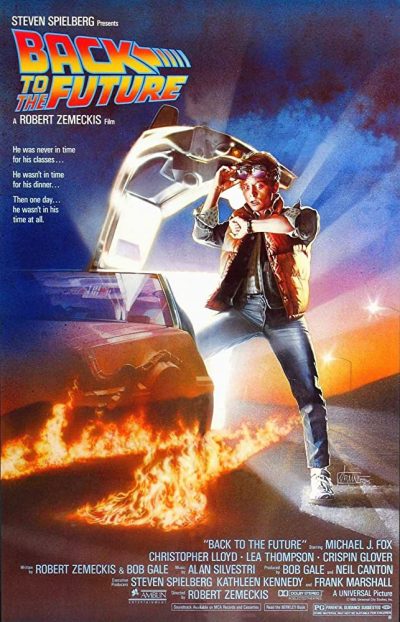 The film, probably wisely, opts not to worry its pretty little head about such temporal paradoxes, instead offering a fast romp through fifties culture, and its contrast to the then-modern era of the eighties. Though from a 2020 perspective, both look like alien territory in many ways. not least for the iconic DeLorean car/time machine. If hardly deep, the script is smart enough to throw in a bunch of stuff tying the two eras and the modified timelines together. For example, the original Twin Pines mall quietly becomes the Lone Pine mall on Marty’s return, due to his having run over one of the pines back in 1955. Or how the cinema in 1955 is playing a movie starring future President, Ronald Reagan, It’s full of this kind of detail, and works nicely.

The movie is mostly a showcase for Fox, even though McFly was played by Eric Stoltz when shooting started. It’s now hard to imagine anyone else in the role, and the thought of Stoltz simply feels wrong. [That miscasting is eclipsed in film perhaps only by Jason Robards playing Fitzcarraldo, until a fortunate case of dysentery stepped in] On the other hand, once you’ve heard John Lithgow was the first choice as Doc Brown, you’ll never be able to unsee his mannerisms in Lloyd’s performance. Fox’s breezy attitude also seems a template for Matthew Broderick the following year in Ferris Bueller, not least when McFly hijacks a performance for his own rendition of rock classic Johnny B. Goode.

The concept of a mother having a crush on her own son is, let’s be honest, more than a bit creepy, even if it’s entirely innocent in terms of the character, and is handled lightly enough to get away with it. There’s also the now-jarring element of Middle Eastern terrorists stealing plutonium and gunning down Doc Brown in a parking lot. History has not been too kind to what was probably seen as a ludicrous conceit at the time, played mostly for laughs. However, this cares not a jot, and is simply content to tell a high-school love story and showcase a really cool car. In contrast, a current science-fiction film going back in time to the year 1955 would probably end up becoming a dour lesson in civil rights – see Doctor Who‘s “Rosa” episode for a case in point. Future is all the more enjoyable for lacking any such weighty concerns.