The blending of horror and comedy is always a tricky proposition. Throw in the action genre as well, and you’ve got to perform a real juggling act to deliver on all three fronts. Not many do a better job than Mr. Vampire, right from an opening in which Man-Choi (Hui) and Chau-Sang (Chin), students of Taoist priest Master Kau (Lam), find themselves menaced by reanimated corpses. The long-suffering master has to restore order with his arsenal of magic, setting the stage admirably for the madness to come. 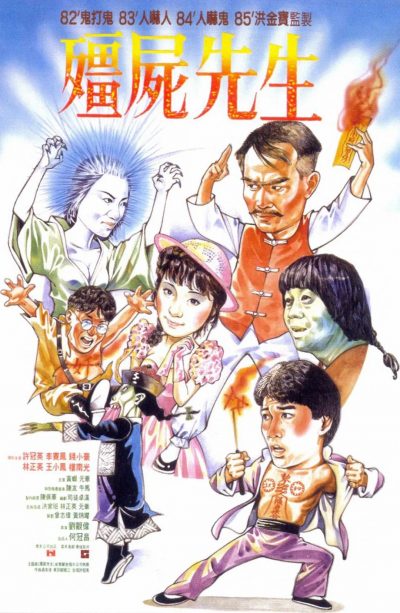 That begins when Kau is hired to advise on the re-burial of a wealthy businessman, in the hopes this will improve the family fortunes. However, it turns out the corpse is a vampire, and when his minions fail to bind the dead body adequately, it breaks loose, bringing hell with it. Kau is arrested and jailed by cowardly local cop Wai (Lau) after the murder of the businessman, actually carried out by his dead Dad. Meanwhile, Man-Choi has been bitten and is beginning to turn, while Chau-Sang has fallen for another supernatural entity, Jade (Wong Siu-fung), a ghost whose head can fly about independently of her body.

Imagine watching, say, Blade II, with absolutely no knowledge of Western vampires. It would be incredibly confusing, and you’d just have to hang on for dear life and enjoy the ride. That’s what this feels like; I can only presume it all makes perfect sense to the local audience, familiar with things like the jiangshi, the creatures of Chinese folklore that are a cross between zombies and vampires. And who, it appears, can’t see anyone who is holding their breath (top). Oh, and did I forget to mention, sticky rice will suck the poison out of wounds they inflicted? Okay…

It’s just so much fun, you can’t help but cut it slack, despite obvious weaknesses. For example, the film seems to get bored of Jade, who literally flies out of the film, and some of the comedy, especially around Wai, falls flat as a pancake. I’ll even forgive them the shameful waste of Moon Lee, playing a role that mostly requires her only to look pretty, rather than kick arse as she would go on to do. Though she is part of the movie’s funniest scene, in which she ruthlessly exposes Lam’s ignorance of Western beverages and their consumption.

The action is really well-staged too, with the three leads bouncing around like spell-casting rubber balls, slapping magic scrolls on undead forehead. Lam is particularly impressive. He has the same quiet on-screen presence as Peter Cushing, and can sell the questionable nature of the events unfolding, through his character’s knowledge of and belief in them. The fact he is calm in the face of the most WTF? moments marks him as a true hero. It’s easy to see why this was both a critical and commercial smash at the local box-office, and spawned not only the subsequent sequels, but also a host of knock-offs along similar lines.