I recall hating this the first time I watched it. Not quite so much now, though it’s still a long way short of its predecessor, and makes some very, very poor decisions. It’s certainly different, not least for being set in the modern era. Archaeologist Professor Kwok Tun-wong (Fat) discovers a “family” of three vampires – daddy, mommy and son – on a dig, and takes them back his lab to study. The boy escapes and, in a plot shamelessly ripped off from E.T., finds sanctuary with a young girl. Meanwhile, Kwok’s intern, Chicken (Lau) gets bitten by one of the adult vampires. Seeking treatment, he goes to herbal doctor Lam (Lam), who recognizes the injury for what it is. Together with reporter Yen (Yuen), he seeks to help the vampires “into an early, happy re-incarnation,” as the subs euphemistically put it. 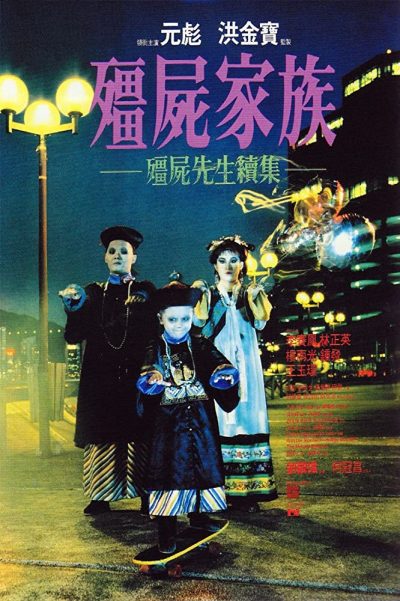 The first hour of this borders on the excruciating. The director is no Stephen Spielberg, and his efforts to imitate arguably Spieberg’s greatest work are ill-founded and badly executed. The whole front half feels like it’s aimed at an 8-year-old with low standards, right down to the musical montage. If you survive this – and I’d not blame you if you didn’t – you then get a sequence in which Yen and Lam battle Mom and Dad in fake slow motion, after cracking open a large bottle of “retardant”. It’s amusing for about 30 seconds. Pity, therefore, it lasts about 15 minutes. And never mind wasting Moon Lee (reduced here to a role as Lam’s daughter), the film wastes Lam, who has only about two scenes in the first hour. And that’s including the slo-mo one.

In the film’s defense, the last thirty minutes is considerably more rousing, delivering much more what we’d expect. A firefight around a truck carrying the parent vampires is rather good, ending with them hopping their way down a line of cars to freedom. They then head off in search of baby, to the apartment where he is holed up with his adopted family, leading to another decent battle there. Amusingly, Lam talks his way in there past the police by presenting his credentials in a nicely deadpan bit of self-awareness, name-checking a number of famous Hong Kong horror-comedies: “My master Sammo [Hung was a producer on the series] had Spooky Encounters, now he has met The Dead and the Deadly. Last year I caught a Mr. Vampire.”

But if ever it were a case of too little, too late, this is it. Indeed, in terms of a sequel which had the same director and star, I’m hard pushed to think of a bigger quality drop-off from the original. The Matrix to The Matrix Reloaded maybe? While the first film managed to strike an impeccable balance between its elements, this manages to forget it’s a horror movie almost entirely until almost an hour has gone by. Even the action elements are muted, with preference given instead to sickly sweet family entertainment. No, thank you.