A blessed return to the basics, this largely abandons the family-oriented approach of the previous installment. No musical montages, hooray! Instead, we get Richard Ng as Uncle Ming, a Taoist priest who stages fake exorcisms with the aid of two “pet” ghosts. Hmm, I wonder if Peter Jackson saw this, for it’s strikingly close to the basic plot of The Frighteners. After being run out of one town, they move on, but their new location drops them in the middle of a war. One side are the townsfolk, led by the rather more magically gifted Uncle Nine (Lam). On the other, a gang of brigands under the literal spell of Devil Lady (Wong), a powerful sorceress. Let occult battle commence. 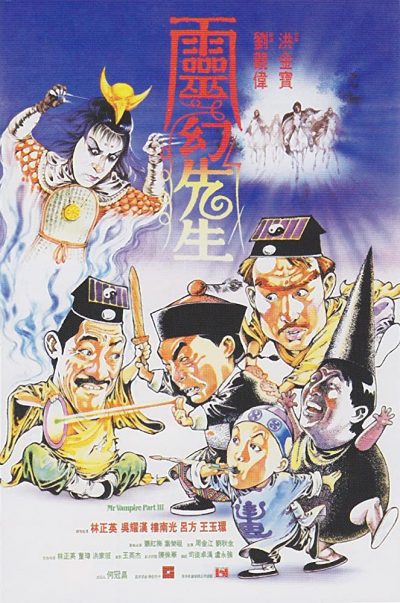 You may have noticed the lack of any actual vampires in that synopsis, and that’s fair criticism. In its native home, the title translates as Mr. Spiritual Fantasy, which is likely more accurate. This is still a good deal of fun, even if it feels like Ming is the focus of the movie’s attention rather than Nine. It’s the former whose story the film follows, and he gets considerably more to do. Not least because he’s capable of getting his arse repeatedly handed to him by Devil Lady and her minions, until Nine rides to the rescue, as appropriate to the plot, and saves the day.

There is certainly a great deal of new lore here: for example, you can tell a victim of possession because their heels don’t touch the floor, due to their paranormal passenger. One particular standout is the notion that coating yourself in tar makes you invisible to ghosts. However, if you’re doing so to yourself, you’re almost guaranteed to miss bits. Let’s just say, if you ever wanted to see Richard Ng’s buttocks, this is the film for you. It’s also possible to destroy ghosts permanently by deep-frying them, though since this is a permanent block on the spirits ever resurrecting, it’s considered a punishment of last resources. And woe betide you if they are not cooked thoroughly enough. Because it appears you then end up with something which looks like a mummy made from melted marshmallow, and understandably in possession of a really bad attitude.

A shout-out is due to Wong, who makes a good impression with her villainous presence, despite not having any real lines to say. The scene where she summons a flock of bats is downright creepy, and likely more effective than Hammer’s efforts in this area. Also keep an eye out for Nine’s birthday party scene, including cameos by a bunch of familiar faces, such as Sammo Hung, Wu Ma and Corey Yuen. If III is arguably little more faithful in content to the original than II was, it is considerably closer in spirit, and in striking the cross-genre balance. Still a little too much dumb slapstick perhaps, especially from the unfunny mugging by Nine’s student Chiang (Billy Lau). Yet the good outweighed the bad more than acceptably for me.